Meezy has to travel to Chicago every couple of months for work, but he never gets to do any tourist things while he's there, since his trips are so short and he's only there during the work week.  Since I am about to be put on travel restriction due to my pregnancy, I decided that Dutch and I should meet Meezy in Chicago on a Friday and we all stay there until Sunday. Dutch had never been on a plane, so I was a little worried about traveling alone with him for the first time, but I figured it needed to happen eventually.

On the morning of our departure, I checked the traffic at about 7am, and everything looked good. Our flight was at 9:30am, so I planned on leaving the house around 7:45am, getting to the airport no later than 8:15am, parking very close to the terminal, and then having 45 minutes to an hour to get through security.  I had already checked us in and qualified for fast bag drop, so I didn't expect any delays at the ticket counter.  I knew that was a tight timeline, but I really didn't want to get to the airport too early and have Dutch already be bored with the situation while we waited to get on the plane.

Of course Dutch was in a grumpy mood that morning, since I was getting him up earlier than normal, and the process to get him ready took longer than usual.  We didn't get out the door until about 7:55. I checked traffic again as I walked out the door, and to my horror, the highway to get to the airport was shown to be at a standstill.  Oh, crap.  If I was going to take a detour, I needed to have left already.  I stayed on the service road as much as possible and went a little out of the way, and ended up arriving at the airport just after 8:30.  The parking garage closest to our gate was undergoing construction, so there was no parking available at any of the lower levels.  I had to drive all the way to the top of the parking garage, in the uncovered area.  From there, I had to maneuver down four flights of stairs with a 40lb bag, a stroller hoisted over my back, two carry-ons, and a 2.5 year old in my arms.  Did I mention I was 7 months pregnant at the time?  It was no easy task.

By the time I got to the ticket counter area and checked in at the fast bag drop kiosk, it was 8:47am. That was past the 45 minute cutoff for luggage, so it told me I couldn't use the fast bag drop option anymore.  Doh!  I went to the ticket counter, which luckily wasn't busy, and the clerk sternly said, "You need to hurry."  She expressed concern that I wasn't going to make it to the gate in time, so she graciously escorted us to the front of the security line (where they check your ID).  From there, we still had to wait in a decently long line to go through the metal detectors.  I still had the stroller, two carry-ons, and Dutch, to manage.  When I approached the metal detector while holding Dutch, I asked if we could walk through together and the agent told me we could, but that I'd have to submit to a body search afterwards.  Ugh.  Ain't nobody got time for that.  I set Dutch down and walked through and then turned around to coax him through.  He wasn't having it.  He started crying and wouldn't come to me.  I pleaded with him and told him we'd miss our plane, but he was too scared to move.  I finally decided to just use the "Okay, I'm leaving" trick and start walking away, and that worked.  I scooped him up and grabbed all our belongings.  I started to feel like we were in the clear, until I saw how far away our gate was.  I had to hustle through a couple long hallways, up an escalator, through another corridor, get on a moving walkway, then down an escalator.  I couldn't put Dutch in the stroller for any of that because I needed to move quickly and didn't have time to keep taking him in and out of it to maneuver the escalators.  When we finally got to the gate, there were just a couple people left to board.  I got the counter agent to check his stroller and we got on the plane.  I haven't been that exhausted in a while.  I was sweating and breathing heavily. Since my original plan involved a few minutes in the gate area before boarding, I had planned to use the bathroom and get Dutch some water.  Well, neither of those things happened.

I had very low hopes for the flight at this point.  I knew I'd need to use the bathroom before too long and that Dutch would be thirsty.  Since the process was so rushed, I thought Dutch might be a little stressed for the actual flight.  I was regretting the whole trip already!

In a miraculous turn of events, Dutch was pretty much THE BEST KID EVER on the flight.  He never got upset, never got whiny, never seemed bothered with anything that was going on.  I had brought plenty of toys and snacks, so he was quite content.  When I needed to get up and use the bathroom, I set him up on the Ipad so that he would barely notice I was gone!  It worked well.  The passenger next to me asked how old he was and commented about how great he was being.  I was so relieved.  His favorite part of the flight was the descent, because there was a little bit of turbulence. He thought it being "bumpy" was really cool.  He even squealed a little bit from delight and that got a few laughs out of our neighbors. 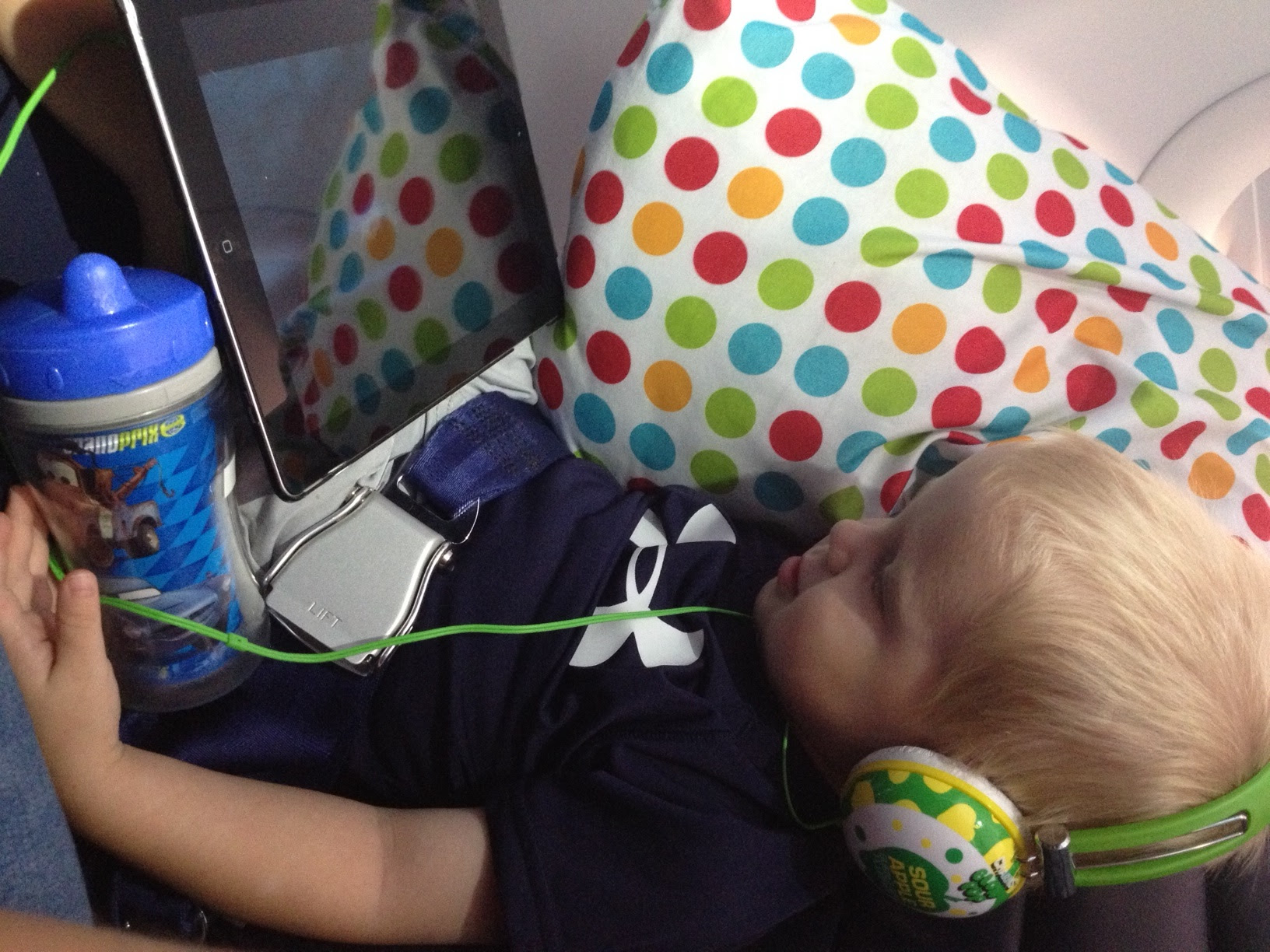 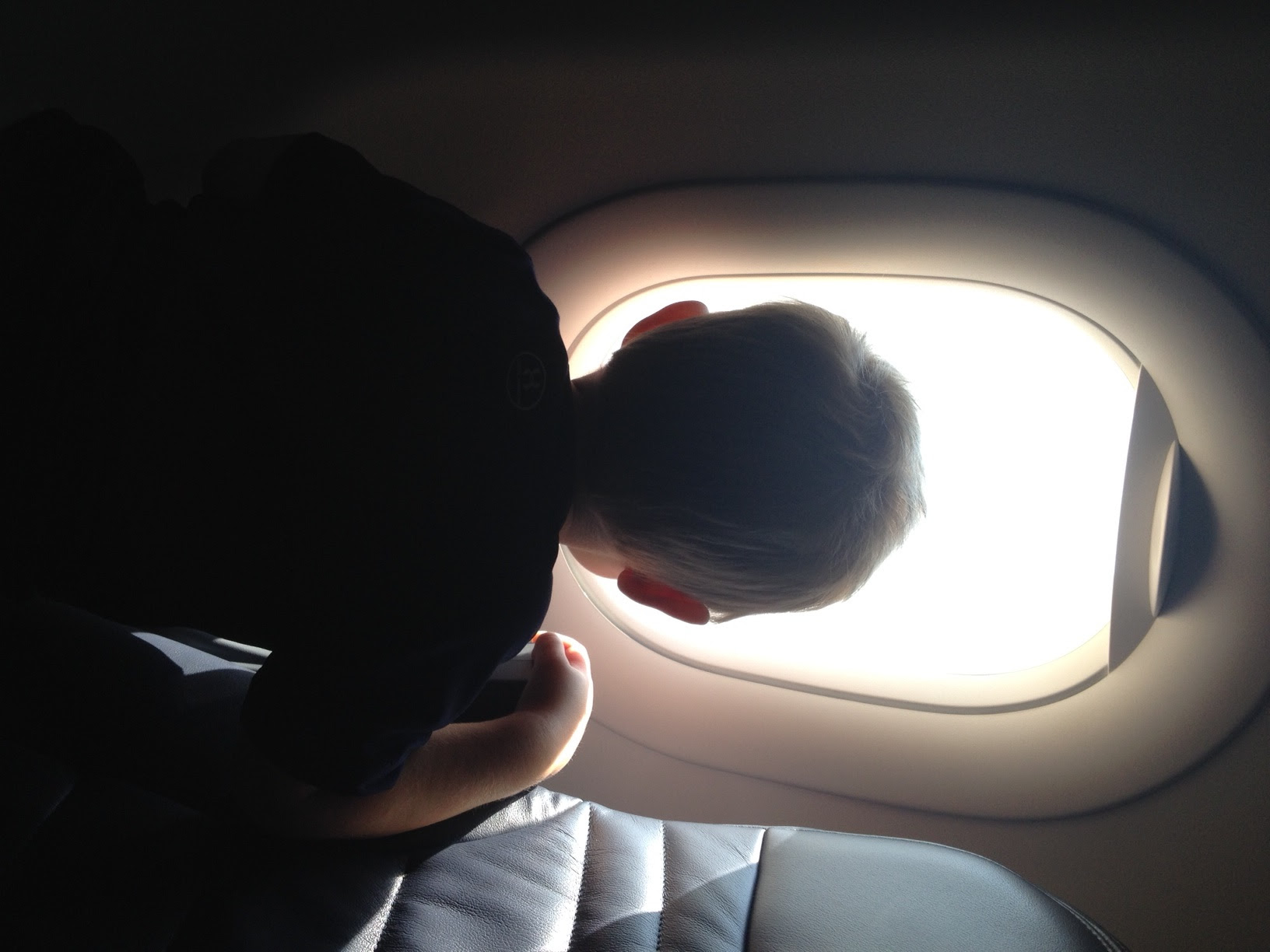 After we landed and I gathered all our belongings, there was a little more disheveled maneuvering to get us to the rental car counter.  I didn't realize they weren't located at the actual airport, so we had to catch a shuttle to an off-site location.  I was so ready to just put all of our bags and the stroller down! Once we got to our car, I finally got to exhale.  It took me a while to get the rental car seat installed, but at least I wasn't carrying heavy bags or a toddler while doing that.  Dutch and I then drove to our hotel downtown, which had its own set of parking challenges, but finally got checked in.  We were able to relax in our room for a little bit and order a late lunch while we waited for Meezy to finish his work day.
Posted by vanweezy at 7:43 PM