I feel a little bad that I'm 26 weeks into this pregnancy and I've barely written about it at all. Honestly, though, I've barely written about anything over the past few months.  My life has been one stressful day after the next.  We have had repair contractors at our house every single week for as long as I can remember.  We've been dealing with plumbing issues since April and HVAC issues since July.  When our plumbing repairs are finally resolved, there will most certainly be a post about it. They have disrupted our lives tremendously and are costing us a fortune.  But, enough about that for now.  Let's do a little catch-up.

This pregnancy has been quite different from my pregnancy with Dutch.  I started out with a ridiculous appetite, I think because I was having really bad "morning" sickness.  Putting food in my stomach helped relieve some of the discomfort, but that meant I ate way too much!  I gained weight quickly and felt like my belly popped out immediately.  Luckily my doctor prescribed something that really helped with the sickness, which in turn decreased my food intake.  I felt dizzier and clumsier more often in this pregnancy than before.  I had the same insomnia and horrible heartburn/reflux that I remembered from last time, but they seemed to arrive much earlier in this pregnancy.  My insomnia is getting better, but the reflux is a daily occurrence.  I often feel like I can't quench my thirst throughout the day.  I will go to the fridge multiple times and attempt to drink milk, tea, water - anything because I feel so thirsty.  That does mean I end up drinking tons of water every day, though, so it's not so bad.  I can't say I "crave" anything - didn't during the other pregnancy either - but I do find myself wishing for candy every now and then.  It's not like a "I have to have this right now" feeling, but more of a "it would be nice if there were skittles in front of me right now" feeling.

Other symptoms include feeling fatigued quickly and going to the bathroom constantly. I remember the excessive bathroom breaks last time around, but again, I feel like that started later in the pregnancy.  I was already suffering this time at 19 weeks.  It's ridiculous.  I'm up at least 2 times a night to pee, and a zillion times during the day. I will literally go to the bathroom, go sit back down at my computer, and five minutes later feel like I could pee again. The worst is when I get the feeling of needing to pee and then can't remember if I just went or not. Man, pregnancy brain is sweet. I'm experiencing some sciatica, but it hasn't been too horrible so far. For about a week at a time, I will get this really sharp pain where my pelvis and spine meet, after I've taken a few steps.  Then it'll be gone the next week.  A couple weeks later, it will resurface.  I'm not getting the shooting pain down my legs or the numbness or tingling I experienced previously from the herniated disk, so I'm hopeful this pain really is just related to the pregnancy.  I was running for the first few weeks of this pregnancy, so I'm optimistic I can get back to that (pain-free) after this pregnancy.

Lastly, my weight.  I know women don't like to talk about this, but let's get serious.  It's on most of our minds.  I'm not embarrassed to say I struggle with my weight and I wish I was 15 pounds lighter before getting pregnant again. Being a mom and having back problems that restricted my exercise meant I didn't get into the shape I wanted to, though. I just see that as motivation to try harder after the second baby. I'm 5'7 and my starting weight was 148.5lbs at 4 weeks pregnant.  That looked like this: 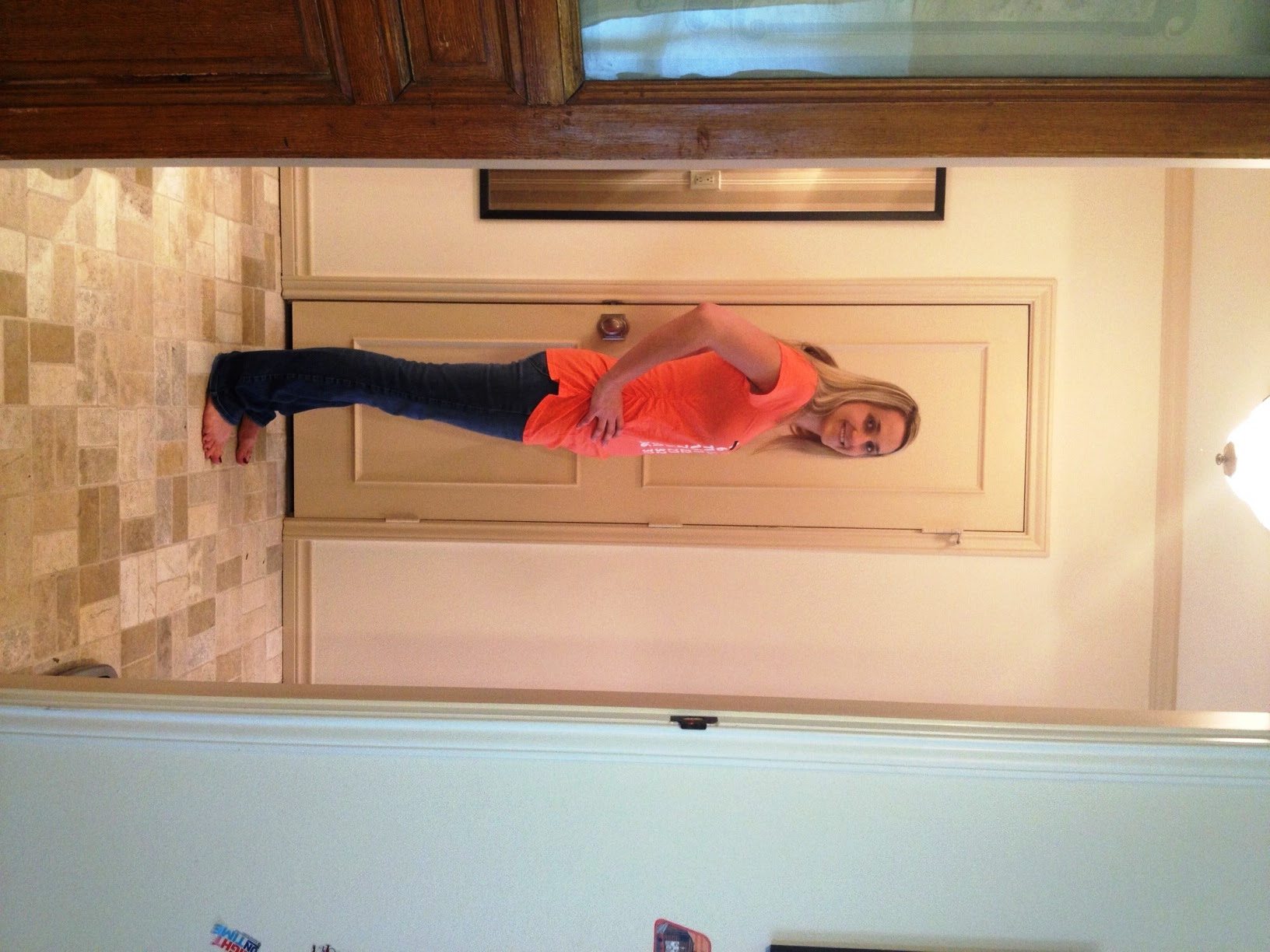 What's funny is that I felt at the time that I needed to lose weight, but I look at that picture now and go, "Damn, I was skinny!"  Lol.  Here's a picture from 12 weeks: 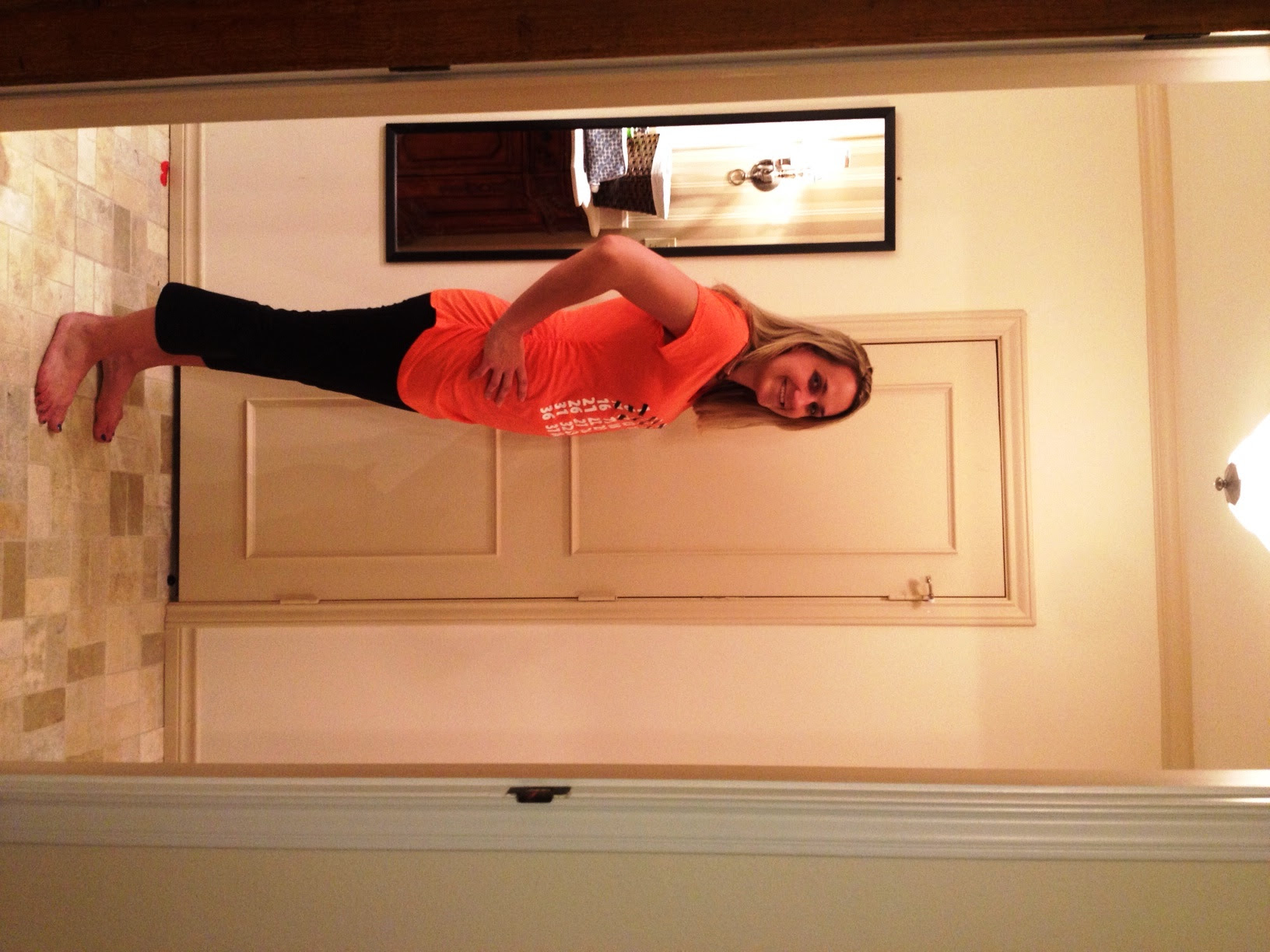 You can definitely see the changes that took place on my front side during those 8 weeks. I forgot to weigh myself and write it down, but I had probably gained 7-10 pounds at this point. Here's what I looked like at 20 weeks: 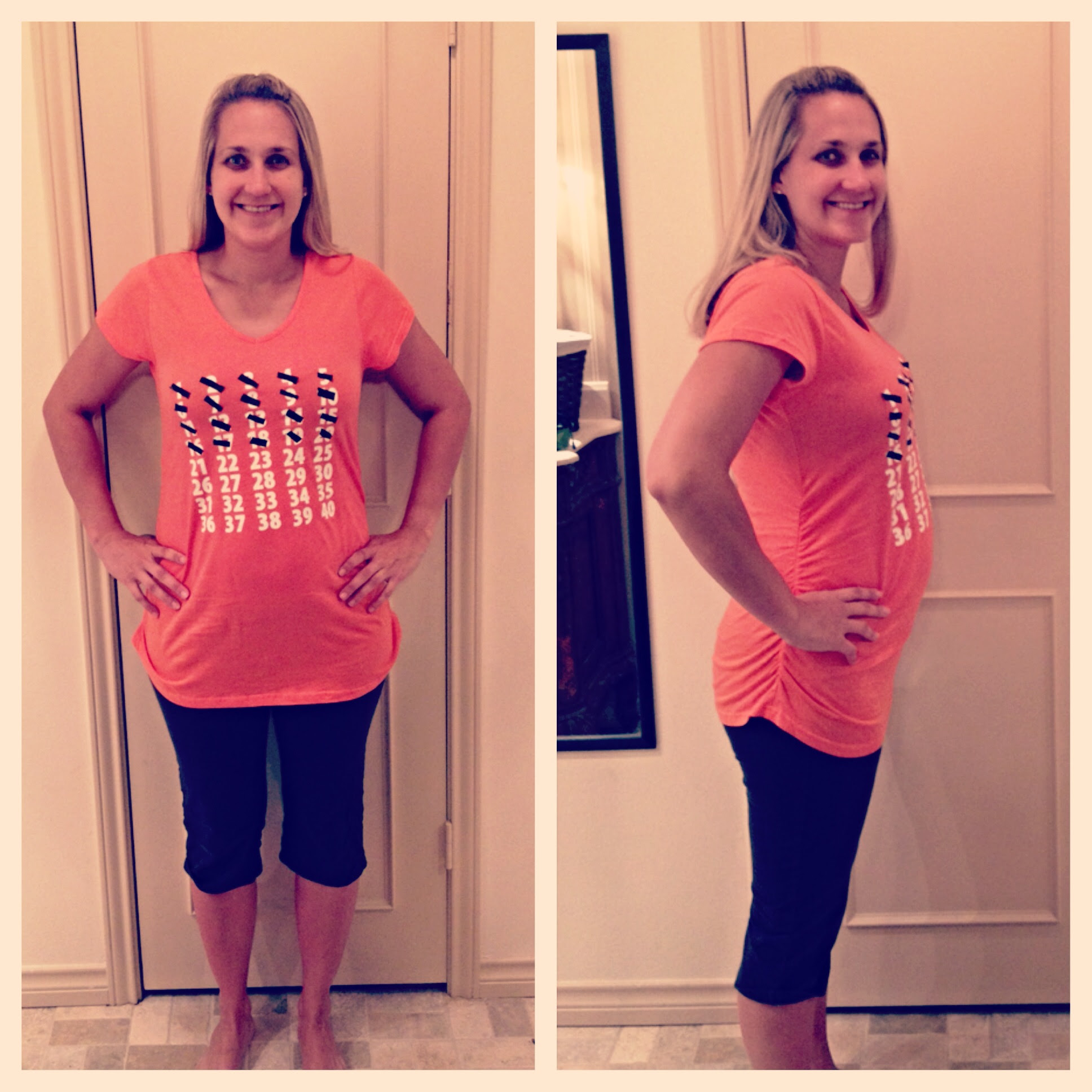 I can admit that I don't look too big, but unfortunately the numbers on the scale told a different story. By 20 weeks, I was up to 167lbs, which meant a total weight gain of 18.5lbs at that point. Considering some people have gained just a third of that at the same point in their pregnancy, you can see how disconcerting that can be.  I haven't taken my 26 week picture yet, so here's the one from last week: 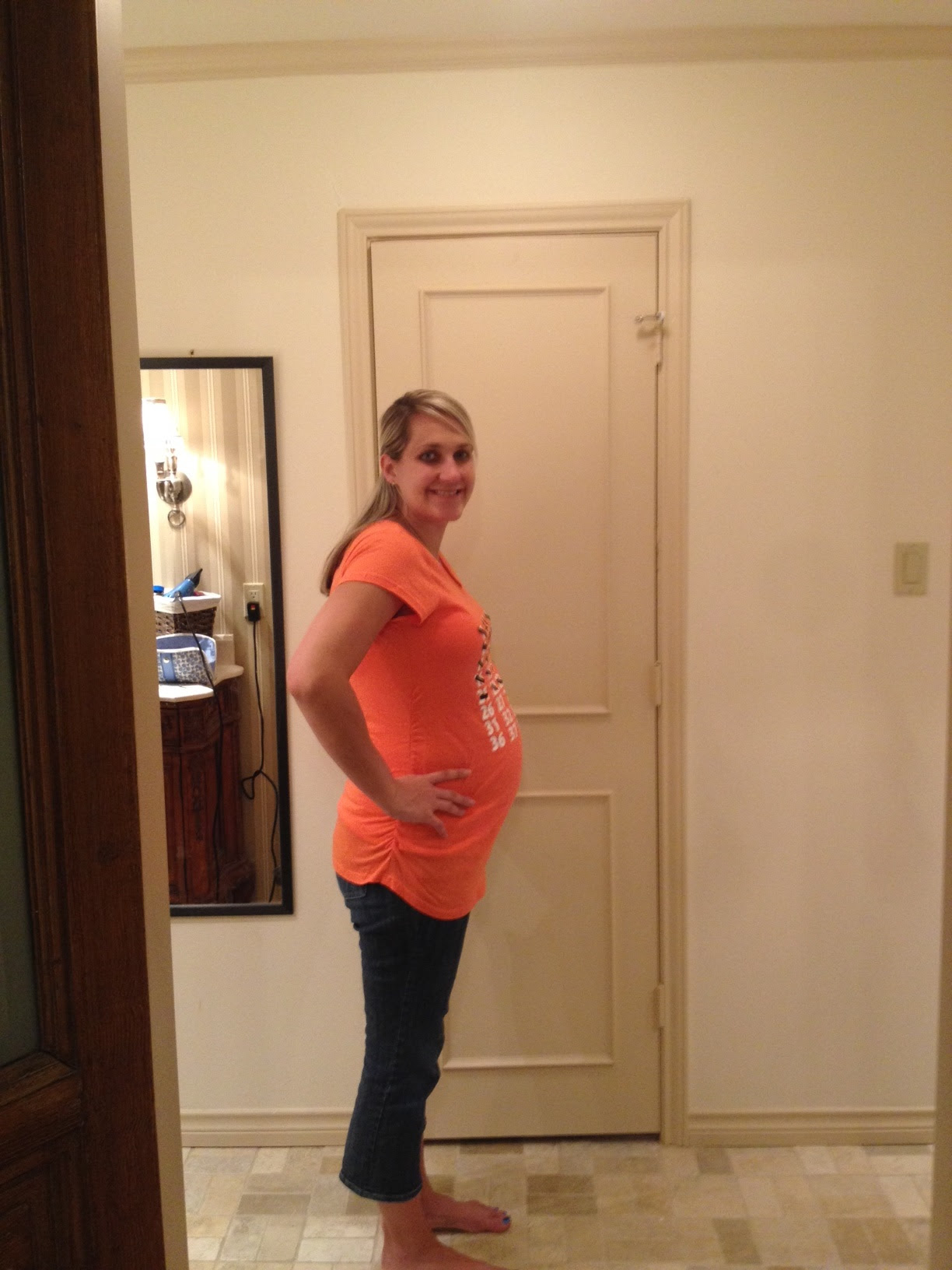 It is what it is!  I'm definitely getting larger and feeling more uncomfortable. My weight is around 174.5lbs now, which means 26 pounds gained.  I'm not a petite person, and I make large babies, so this weight gain was to be expected.  But, I'm hopeful I can keep it under control and not gain more than 40lbs total.  I gained at least 45lbs with Dutch, probably closer to 50.  I was able to get it all off in about 5 months' time, but if I can keep my weight gain to 40lbs or less this time, maybe it'll be a little easier!  I'm not gonna lie, though, making big babies is not so bad. I can feel this baby move constantly, very clearly.  I like that he's large enough that I can really feel all of his movements.  It's a nice reminder throughout the day of what the bigger picture is in all of this.

You look wonderful! Just enjoy it!!

You look amazing girl! All of my second pregnancy ailments were worse as well... or at least showed their lovely faces earlier. Labor and Delivery was easier though so remember it is short lived and that precious boy will be here soon!