The Sewer Line Disaster of 2014

I don't know what else to call our sewer line situation besides a disaster. It stressed me out for about six months this year and cost us a fortune.  I guess we'll start from the beginning...

Last November, we got 13 exterior piers installed to stabilize our foundation.  That cost us $4,485, but we negotiated the purchase of the house with that in mind, since we already knew it would be necessary.  So, no harm, no foul.  After the piers were installed, a plumbing company tested our freshwater and sewer lines and said that we passed, meaning we had no leaks.  This April, we decided to get some additional foundation work done, because we felt like a couple more exterior piers were needed and some interior work might be necessary. After evaluating our options, we decided not to do interior piers because of the disruption it would cause to our hardwood and tile flooring.  Still needing interior stabilization, though, we opted instead for mudjacking. This was a less invasive process, because they could just drill small holes in rooms with carpet, inject the leveling substance, and then lay the carpet back down when finished.  That cost us $4,980.  We hadn't factored that into our purchase negotiations, so it hurt a little bit.  (Little did we know that was only the beginning!)

Before a company does mudjacking, they require water tests to make sure there are no holes in your plumbing lines.  If there are, you run the risk of injecting the substance into your freshwater or sewer lines.  Since we had just passed those tests five months prior, I wasn't worried.  Much to my surprise, this plumber told us we failed the sewer test. WTH?  I figured it must be a small leak, maybe from just a crack, not a hole, so we scheduled a leak detection for the next day and crossed our fingers. Oh.My.Gawd.  That was the first in no fewer than six leak detection visits we had from four different plumbers over the next several months.  I wanted to pull my hair out because every plumber that came verified that we failed the test, but none of them could tell us why we were failing.  After spending nearly a thousand dollars on detection, with no conclusive results, we went ahead with the mudjacking because we figured if the leak(s) wasn't noticeable enough to be found, then it wouldn't be large enough to give us problems with that process.  It was possible the leak(s) was on the complete other side of the house from where we were doing the mudjacking, so it wouldn't have come into play anyway.  Either way, that process got completed, and we took a couple weeks' break from worrying about the plumbing.

After a little more time had passed, I decided we had to address the failing sewer test.  Our foundation warranty wouldn't go into effect until we showed a passing test, and I would have to disclose the existence of a sewer line leak if we ever put our house on the market.  Those were compelling enough reasons to press on.

The next option for figuring out where our leak(s) was, was to shoot high pressure water throughout our lines to try and clear up any scaling or debris that might be blocking the lines.  Most leak detection is done through running cameras through your lines and looking for problem areas, and if we have debris in the way, that can prevent conclusive results.  The potential con, though, is that if you have brittle lines, high pressure water can cause cracks or holes.  We felt pretty hopeless at this point, so we agreed to the procedure.  That was another $150.  After that was done, they ran cameras again and this time told us they had definitely identified three leaks.  But, there were still some areas that were hard to analyze, so they couldn't promise us all our problems would be solved by addressing those three.  They mentioned our best course of action was replacing ALL our sewer lines, and we quickly dismissed that.  We opted to address the known leaks.  Now, that's easier said than done, because the pipes needing repair/replacement were underneath our house.  They were all directly located under floors covered in hardwood or tile.  If the plumbers went straight down through our floors, we'd then be stuck with replacing thousands in flooring on top of the actual plumbing costs. That wasn't appealing to us. We asked for an alternative and they suggested tunneling from the outside. That was pricier on the plumbing side of things, but we felt it would still be cheaper overall than replacing flooring, and would also mean less disruption to our lives (because the work would be done outside/underneath our house).  The total cost for that? $7,965.  The access points were a tunnel in our garage and a tunnel underneath Dutch's bathroom (that would serve to reach two of the leaks).

This is how much dirt came out for the garage tunnel

Dirt from Dutch's tunnel and some of the old pipe

After that work was completed and paid for, you can guess what happened next.  We STILL failed the sewer test. Can you even fathom what was going through my head at this point?  I felt like I was on a prank show.  I think I was in such a daze that I couldn't even muster tears. Instead of continuing to do more leak detection and more spot repairs, we decided we had had enough.  It was time for full sewer line replacement.

As you can imagine, this job would be a huge undertaking. Instead of replacing the lines as they were currently located, it made more sense to replace and reroute all the existing lines outside of the footprint of our house, meaning there would be no more sewer lines running underneath the full expanse of the square footage. Each of our 5 areas of plumbing would be tunneled underneath and then from there the lines would be turned outward to follow a path around the house to hook up to the main city line.  Every inch of it would be new PVC as opposed to 50-year old cast iron. To make a path for the new lines, lots and lots of trenching had to be done. So, 77 feet of tunneling, 201 feet of trenching, plumbing repairs and city permits added up to $15,355.  Wrap your head around that, and don't forget this is on top of every expense I've listed already.

All of this work took about 3 weeks.  For 2 of those weeks, we had to be flexible with which plumbing we used.  For instance, for a few days I wasn't allowed to do laundry or use my kitchen sink. For a few days, we weren't allowed to use our master bathroom or Dutch's bathroom.  We luckily only had one night of absolutely no plumbing use allowed, and for the rest of the time we just had to avoid some areas while still being able to use others.  Having contractors in and out of our house every day was frustrating, though, especially for two adults who typically work from home. The last week of the process was spent on backfilling, repairing the hole in the garage, and repairing our sprinkler lines.

All in all, we got a brand new sewer line system serving our house, which is definitely a huge selling point. It's not often you can find a home built in the 60s that has all PVC lines instead of cast iron. It's also not common for all of your lines to not be underneath your house, which means any potential issues (way in the future!) can be more easily diagnosed, analyzed, and repaired. We also have a very clear map of where all our sewer lines and clean-outs are. A small part of this is benefiting us now, but the big return won't be seen until we sell down the road.

Some collateral damage from the repairs was the effect it had on our yard.  Not only did the trenches ruin our sod, but the massive piles of dirt that sat in our yard for weeks killed the grass underneath too. We aren't going to address re-sodding until next year, when we can see just how much came back and how much is a lost cause. We did manage to cover up a big portion in one of the yards with the installation of Dutch's new playset.

I know my words aren't giving you an adequate feel for just how tremendous this project was, so here are some pictures and a video: 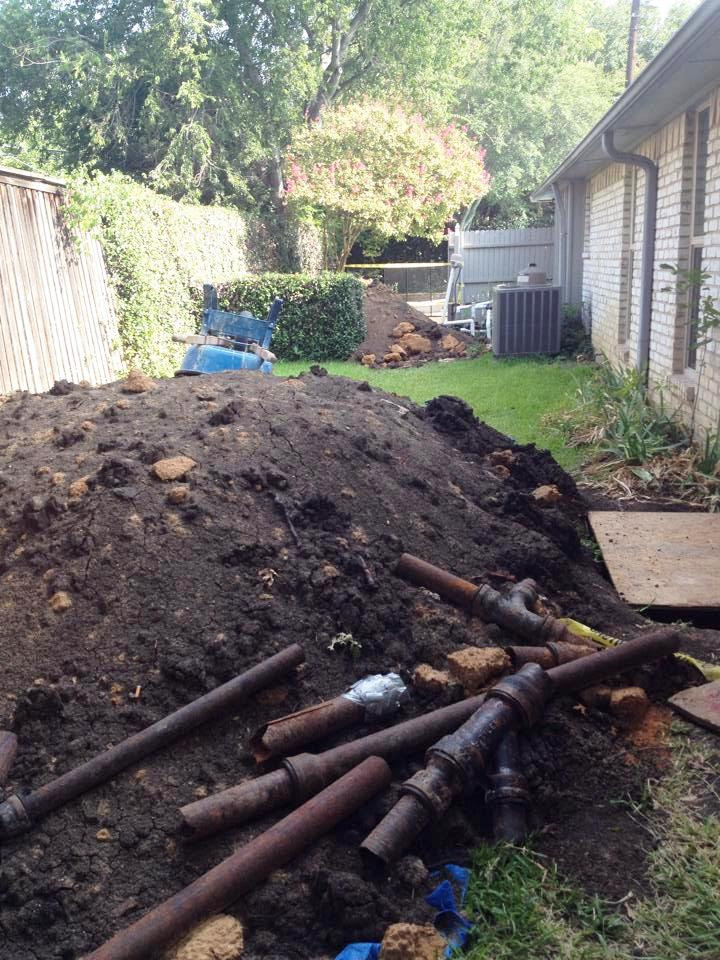 Looks similar to the one above, but now you can see the second pile in the background 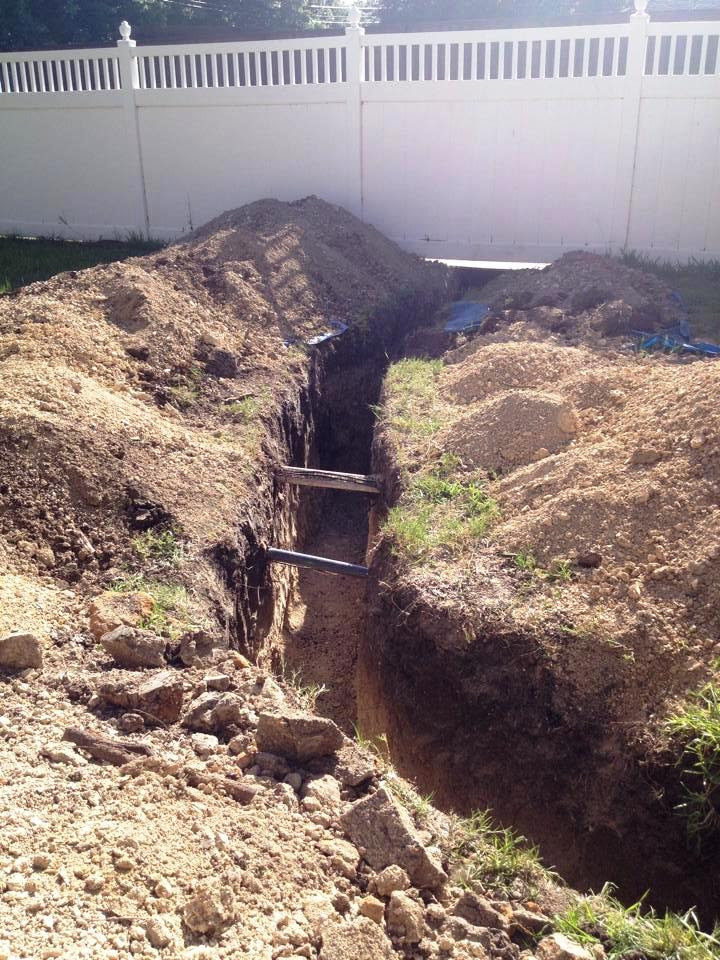 Trench that heads out to the main city connection 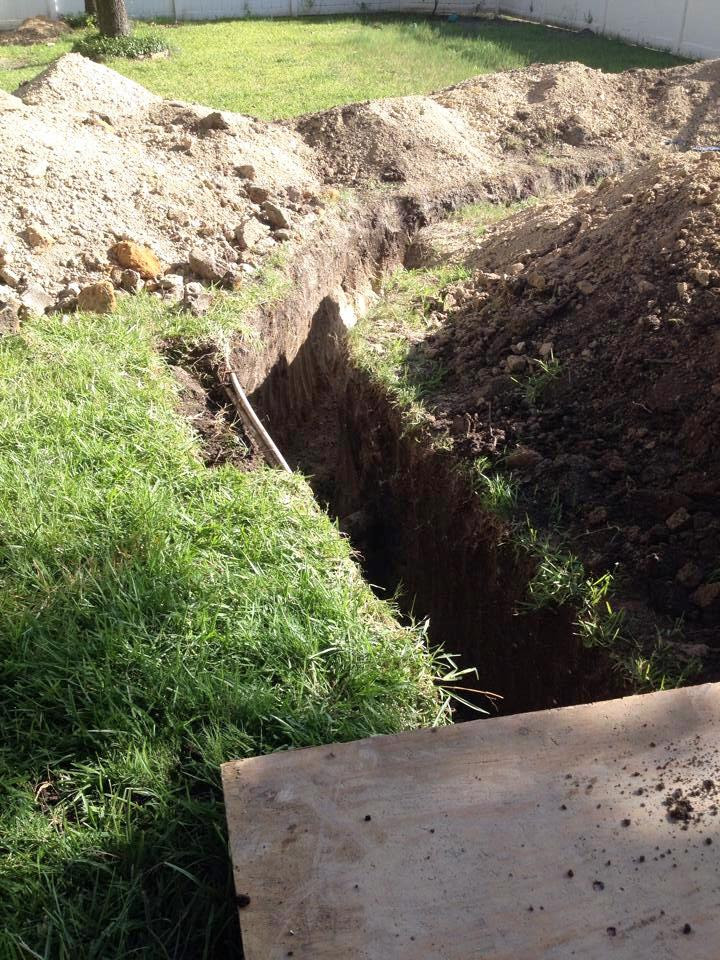 Another portion of that trench 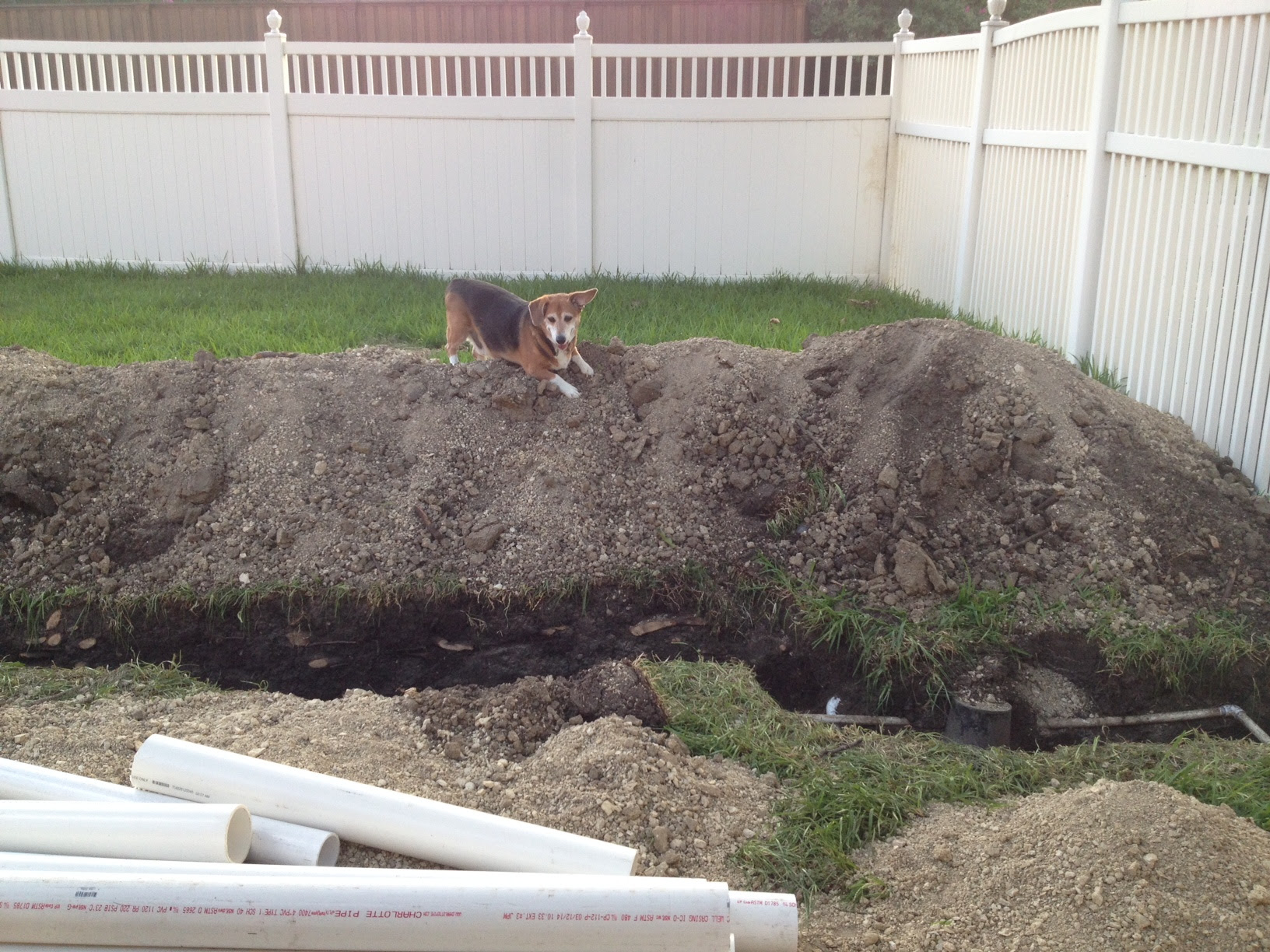 Trench portion in side yard that continues to front yard

This shows the disruption to our front yard: