I wish I could say I'm talking about myself, but the skinny refers to my dog, Riley.  I mentioned previously that he's lost 20 pounds since we switched him to diet food and increased his exercise.  While I am very thrilled with the results, with it has come a few problems!  His weight loss has increased his agility and he's quite the spry little guy now.  We're discovering that we have to Riley-proof our house while we're gone.  The first casualty was my Michael Kors purse.  Overnight, I had left it on the kitchen counter, and apparently he smelled the gum I had in it and decided he had to have it.  It would've been alright if he had just gotten the gum out of it, but for some reason he felt the need to also totally destroy my purse.  Straps had been chewed apart, and there were multiple holes.  It was beyond repair.  :( 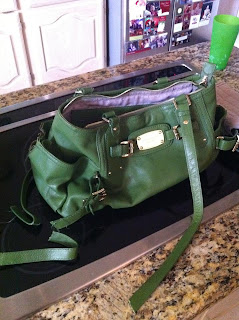 The amazing part about it was how he even got up there to get the purse in the first case.  He jumped first on our bar stool, then onto the counter.  At his former weight, this never would've been possible! 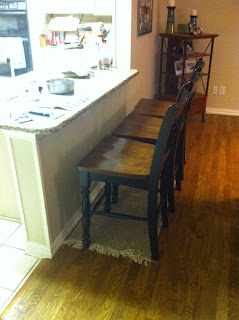 A few hundred dollars down the drain was bad enough, but the second casualty was more painful to me than the first.  I learned my lesson with the purse and stopped putting it on the counter overnight, but I failed to realize our other counters were vulnerable as well.  We keep the dog treats and rawhides next to our sink, and Riley got into them when I was out running errands today.  Here's the path he took: 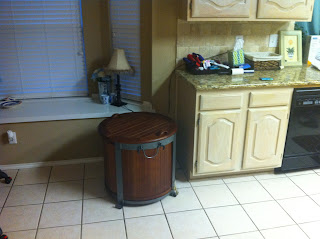 First he jumped on the window seat, then on the wooden cooler, then onto the counter.  He's too damn smart and skinny for his own good!  There were lots of treats and rawhides up there, which is why I call it more painful than losing my purse.  He doesn't know when to stop when food or treats are in front of him (hence his former weight of 60 pounds), so pretty much everything was gone by the time I got home.  That can't be good to ingest all of that in one sitting, and it sure doesn't help our weight loss attempts.  The ironic part was that I was at the vet buying him more diet food when this happened.  Doh!
Posted by vanweezy at 5:11 PM