Jer and I and a few other couples meet every other month or so for "Supper Club."  (Yeah, we're trying to come up with a cooler name!) We always have a different theme and rotate which couple will be hosting, and each couple attending contributes to the meal.  Since I've joined, we've had Mexican, Greek, and Italian-themed nights.  Last night's theme was Bacon Bonanza.  A couple members of the group might have what you call a little bit of a bacon fetish.  Haha.  Every dish brought to the dinner needed to incorporate bacon somehow.  Jer and I threw around a couple of ideas, and finally decided on "The Bacon Explosion."  I think our friend Haydel gets credit for sending us the recipe.  When I first saw it, I thought it was a joke!  It's actually relatively easy to make, but probably a little heavy on the heart to eat.  :)

You need two pounds of thick-sliced bacon, two pounds of loose sausage, some barbecue sauce, and some barbecue seasoning.  We used spicy sausage to give it more kick.  You start by laying out a 5x5 (or bigger) square grid of bacon, and basket-weave it.  Then you douse it with seasoning.  Next you lay out a layer of the sausage, making sure it reaches the edges and is uniform in thickness.  Then you fry up a couple pieces of bacon, let them dry, chop them up, and sprinkle them over the sausage layer.  Follow this up with a drizzled layer of barbecue sauce and some more seasoning.  Now it's time to assemble!  Grab the sausage layer (while leaving the bacon basket weave), and roll it on itself.  It's easiest when someone else is helping!  Once you're done rolling, pinch off the sides to seal it up.  Then, starting from the end of your sausage roll, take the basket weave and roll it back over the roll in the other direction.  Sprinkle some more barbecue seasoning on it and the preparation is done!  Here's what it will look like at this stage: 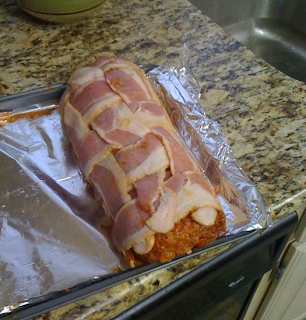 Now it's ready to be cooked in a cloud of hickory smoke at 225 degrees.  You can always brush another layer of barbecue sauce on it to keep it intact during cooking.  When the internal temperature hits 165 degrees, you are good to go!  It can take a few hours, so don't rush it!  I think ours took a little over 3 hours.  Here's what it looks like, sliced and ready to serve: 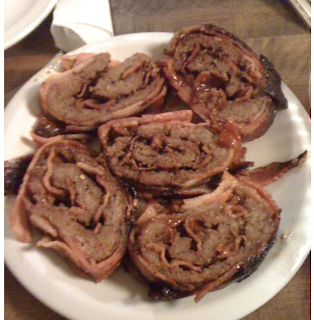 As weird as it sounded, it actually tasted amazing!  The spicy sausage was a good choice, and the barbecue flavoring topped it off nicely.  I recommend giving it a shot at your next barbecue.  The link to the full recipe was included above, and here it is again: Enjoy!
Posted by vanweezy at 12:19 PM