This post will not be interesting at all for most readers, but I thought it might be helpful for Dallas residents who are trying to understand their water bill and/or for those who are trying to save some money.  When we moved to a new house in April, we figured our water bill would increase since we were getting a larger lot and a pool.  In the city of Carrollton, our monthly bill was usually about $60, increasing to $90 when we watered a lot (meaning usage of 10,000 to 15,000 gallons depending on the month).  Our first bill at the Dallas house was $250, showing 20,000 gallons of usage.  Whaaaaaat?  I was shocked.  But, work, home repairs, moving in, and back problems took priority, so I quickly forgot about the high bill.  The next month rolled around and that bill was $290, showing 26,000 gallons of usage.  Okay, something was going on here.  We needed to get to the bottom of it, because we were scared the bills being that high meant we had a leak.

We made sure none of the faucets were on and none of the appliances were using water, and we checked the meter.  It wasn't spinning, so it didn't appear we had a leak to/in the house.  Could it be a leak in the pool?  The water level didn't seem to be dropping at an excessive rate, so that didn't seem like an issue.  We checked with friends who also had pools, and we weren't filling ours up any more than them.  Why was our bill so high?

After more scrutiny of our bill, we discovered that one big culprit was all the extra items the city charges you for.  They make a killing even if you don't use an ounce of water!  Their "base charges" are fixed, based on your meter size, and you will pay them monthly regardless of your usage.  Turns out we have a 2" meter, which means we are on the hook for $50.64 each month, before even considering usage or sanitation or storm water. From the bill, "Base water and sewer charges cover fixed costs such as reading and maintaining the meter, account maintenance, mailing bills and processing payments. Base charge for sewer also includes cleaning the sewer system to minimize blockage." 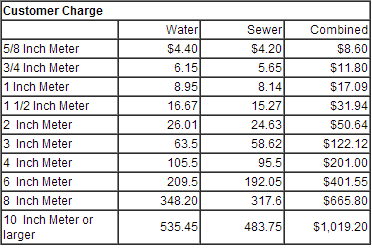 So, bam, our bill will automatically be nearly $51 higher each month in Dallas than Carrollton because of these base charges.  What else?

Garbage/recycling/sanitation fees are similar between the cities ($20-$22), so nothing out of the ordinary there.  An additional charge that we didn't see on our Carrollton bill, but did in Dallas, is something called "Storm Water Charges."  From the bill, "This fee funds the City’s storm water utility, formed in 1991, to meet requirements of a federal mandate to control storm water pollution. It also pays for other routine maintenance activities that affect storm water quality."  That means nothing to me, except that I have to pay $14 each month for it.  Bleh.  So, now I've accounted for $65 of the increase I saw when moving between cities.  What else? 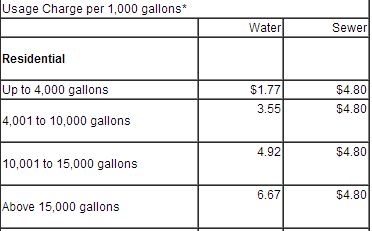 The city tiers their usage charges, which isn't uncommon, but of course their rates are $1 - $2 higher per one thousand gallons than the city of Carrollton's was. If I had been using 26,000 gallons of water in Carrollton, I would've paid about $90 for it.  In Dallas, that equals $150.  Arrrggh.  So, that's another reason for the increased bill - higher rates. Same for the wastewater rates.  Carrollton was $2.02/thousand gallons for sewer and Dallas is $4.80.  What else?

My sewer usage/charges in Dallas are about 69% of my water charges, versus being 42% in Carrollton.  Why is that?  Well, here's how they come up with your sewer usage, per the bill: "Annually the sewer average usage is calculated from the most recent December--March usage. This typical winter average establishes the maximum sewer usage amount until a new winter average can be calculated."  Without looking at the actual numbers on my bill, and reading that, I would say to myself, "Sweet!  The house was vacant during those months, so surely the average will be low."  Nope.  The city tells me since I'm a new customer, they can't use the previous customer's average from those months, so they have to stick me with the average of ALL customers with a 2" meter until a new average can be calculated for me personally.  That means until next April, when hopefully they can see my average will be lower, I am stuck paying $103.83 a month for sewer.  No way to get around that.

Basically, that means I have fixed costs of base charges, sewer, sanitation, and storm water that I will be paying, regardless of whether I ever turn a faucet on.  What's the monthly total on that? $156.09.  Wow.  Is that not mind-blowing to you, too?  My bill will definitely be over $150 each month, no matter how much water conservation I try to do.

Despite the hopelessness I felt after realizing this, I decided to still investigate why our actual usage increased so drastically from one house to another, even though the number of occupants stayed the same.  I took advantage of one service the city offers, called the Free Irrigation System Check-Up.  Maybe we weren't being efficient with our watering. Maybe there were leaks in our system.  I just wanted the chance to talk to somebody about it, while hopefully learning some helpful info about water usage.  I signed up for a consultation, and someone came out within a week.  He spent 30 minutes analyzing our system, and was able to tell me about any heads/nozzles that were broken, missing, or needing adjustment.  He also pointed out two small leaks (not actually responsible for increased usage, just something to be fixed at some point).  He gave me recommendations on how often we should be watering, and at what time of day.  That was all really cool info, but the most important thing I learned from him was just how much water our sprinkler system uses.  We are currently on a very conservative watering schedule, only about 12-15 minutes a week.  But, since we have such a large lot, that still translates to 11,000 gallons of water a month.  I had no idea!!  That's on par with the entire usage we had in a month in Carrollton, and yet in Dallas, it's only attributable to our sprinklers.  Consider our typical household usage and topping off the pool weekly along with that, and it doesn't seem so unreasonable to have 25,000 gallons a month of usage.  The scary thing is that he recommended watering for more like 30-40 minutes a week.  Ummmm, I don't think we can afford that!!

On a somewhat related note, the city also has another cool program called New Throne for your Home Toilet Replacement Program.  If you've got an older home, chances are you might have a toilet in it that is inefficient.  These days, most toilets do 1.6 gallons per flush.  Before 1992, toilets were doing 3.5 or 5 gallons per flush. If you want to replace a toilet like that, the city will give you one (or two!) for free!  You complete a form, get your voucher, and then go pick up your toilet.  You have to arrange the installation of the new one and removal of the old, but the toilet cost is free!  I didn't know about this when we decided to replace one of our toilets in April, but, lucky for me, they also offer rebates.  All I had to do was fill out a form, attach my receipt for the toilet we purchased, and then I'll get a credit for $90 on my next water bill, representing reimbursement for the cost of the toilet.  Not gonna lie, that's a pretty sweet deal.

In conclusion, there's not much I can do about our high water bills.  I guess I'm relieved we don't have a leak, but I'm still not happy about how high our utilities are at the new house, especially considering we haven't even hit the dead of summer yet.  At least I've taken advantage of a couple of the city's water conservation programs, so that I feel like I'm getting a tiny bit more for my money.

Wow! This is interesting....and sucks all at the same time. But since we are about to purchase and considering several different cities in the area this is extremely helpful.

Thanks so much for taking the time to post this detailed information.

Good writing; very informative! I have noticed that my rates jumped when moving from Richardson to Dallas, too. It's frustrating, but I could see that all the pipelines, pumps, energy, chemicals, design, engineering and labor could add up and result in a high price. I definitely appreciate being able to have safe water and wastewater services. Coming from India, I know what it looks like when things are not maintained properly (imagine having wastewater come out of your faucets (YUCK!)!

Thank you for such a thorough blog on this topic! I have never had the need to read my water bill before. However, after moving from the suburbs of Houston to the city of Dallas that has all changed.

We have only been in this home for 2 months and our 1st water bill was $482 with the 2nd month being still very high at $453! Similar to your experience in Carrollton I expected to pay $100 - $150 per month and I have to tell you we don't have a pool!

I don't mean to ask a ridiculous question, but having never needed to understand my water bill I really don't know what I am reading.