A couple weeks ago, we went to a holiday party at our friend Casey's house.  On his wall was a huge world map with pushpins in the places he had traveled.  I thought that was a really neat idea, so I decided to replicate it.  It ended up being a little more trouble than I expected, but I think the finished product is pretty cool! We don't have tons of empty wall space in our house since each room is fairly decorated, so I chose a map that wasn't too large.  It is 24" x 36" and I got it on Amazon for $16.99.  We originally thought we could just put it on a cheap bulletin board, but the one I ordered from Amazon that was 24" x 36" didn't actually have that much area of cork board.  That size included the frame in the dimensions.  We were hoping all of the map would be on top of cork board, and then a frame would be around it.  So, lesson learned.

We went to Michael's to either look for a larger bulletin board, or find an alternative method of mounting/framing.  Since 24" x 36" was the largest board they sold, we had to get creative.  We found a canvas of the correct size for $24.99 and then found a backless wooden frame for $99.99.  The canvas fit nicely into the frame, but in order to get it to stay into place, we had to buy some canvas to frame clips ($2.99).  Now, this was way more than we originally planned to spend on this project, but luckily some coupons saved the day.  The frame was on sale for 50% off, and I had a coupon for 40% one item from checking in to Michael's on foursquare.  That brought our framing total down to a much more reasonable $70.  Add in the map pins I bought from Hobby Lobby for just a couple bucks, and the map itself, and the total spent for this project was around $90.  (I'm leaving out the wasted $24 I spent on the bulletin board, since it could've been avoided had I known the way the measurements worked on them).

To get the map to stay on the canvas, we just taped some of the edges.  Then we mounted the canvas inside the frame with the clips.  The frame didn't have wall mounting hardware on it, so we just borrowed some from another painting I had at home that we weren't currently displaying anywhere.  Once we had it on the wall, we went about placing map pins on the cities we had traveled to together.  We've individually been to more cities due to work or family vacations at younger ages, so we decided to only pin cities we had been to as a couple.  While it was fun to reminisce about all the neat places we've been so far, it was also a good reminder that there's so much of the world we haven't seen yet!  Hopefully we'll get to add some more pins in the next few years. 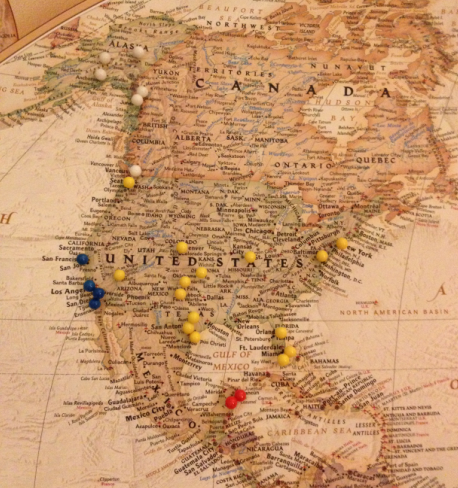