They Keep Me Young

At this point in my life, I'm content with my "children" consisting of 3 dogs.  Actually, a more accurate statement might be that I can only handle 3 dogs, and throwing a human child in the mix would not be conducive for my sanity!  For as much as my doggles (yes, doggles) drive me crazy with their muddy paws and 3am bathroom breaks, they truly are a few of my most favorite things in life.  They can always manage to bring a smile to my face even on my worst day.  Consider this blog post my tribute to my kids!  :) 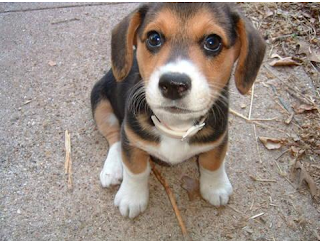 Around the time Jer was graduating from Tech and moving back to Amarillo, I decided I needed a pet to keep me company during my final year in graduate school.  Jer and I visited a pet store in Lubbock, and saw what we thought was one of the cutest puppies we had ever seen.  The label on his cage said "Corgi/Beagle mix" and his oversized head on a little body just stole our hearts.  Little did we know he would grow up to have a little head on an oversized body! 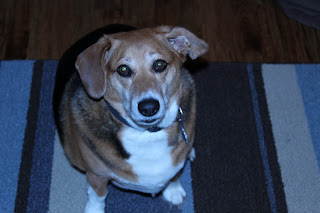 Over the years, Riley and I have formed a special bond.  He truly is a mama's boy and will be loyal to me until the day he dies.  When we arrived home one night last year to find our back gate wide open, I was paralyzed with fear.  That is, until Riley came running towards me with this look on his face as if to say, "Look Mom!  The back gate was wide open for me to escape, but I stayed here and waited for you!"  That's my boy!  As for the other two dogs, well, they tasted freedom and went out on a midnight escapade (later to be found safe!).  Riley has indeed provided us with some comical moments.  He's a very curious dog, and sometimes that gets him into trouble.  One time, Jer had hung his short sleeve button-up shirt on the corner post of the footboard of our bed.  Riley decided he needed to investigate and began to sniff the shirt.  He kept advancing and kept sniffing, and quickly found himself with his head stuck all the way through the short sleeve, peering out the other end.  He was trapped and tried to walk away, but since the shirt was hooked on the bed, he could only travel in a semi-circle.  It's one of the funniest things I've ever seen.  Typically, Riley tries to rule the house and guards anything new that comes in it (from the other dogs).  Even if he has no clue what something is, if it's new, he wants it and doesn't want anyone else to get near it.  We say he has the Napoleon Complex since he's got such short legs, but purports to be a large, authoritative dog.  I know he's really a sweetheart, though.  As much as Cesar Milan wouldn't like it, I love when Riley "claims" me by sitting on my lap when others are around.  I joke that if I ever go missing, just put Riley on the case and he will find me. 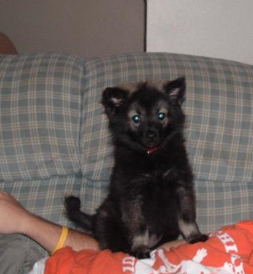 I grew up with Keeshonds in my household.  If you don't know what a Keeshond is, think of an oversized Pomeranian, probably black or silver in color.  I always loved the ones my family had for their sweet temperament, their personality, their affection, and their rarity.  In college I talked often to Jer about how I wished to have one someday, if only I could find one.  I had never seen one in a pet store, or local shelter, or classified ad.  I searched the internet and usually came up empty-handed, unless I wanted to drive to another state.  I had pretty much given up hope of having one, until a special day in June, 2005.  That day, the 24th, I was lured to a park in Lubbock by Jeremiah, under the guise that I'd be watching him play in a frisbee football game.  When I arrived and saw only his car in the parking lot, I was confused.  He blindfolded me and led me to a clearing in the woods.  As I took off my blindfold, and saw a picnic laid out and waiting, he placed an adorable Keeshond puppy in my arms!  Through my excitement and teary eyes, I almost didn't notice he was crouching on one knee with an engagement ring in his hand too!  That was a very special day in my life, and it's nice that Casey was a part of it. 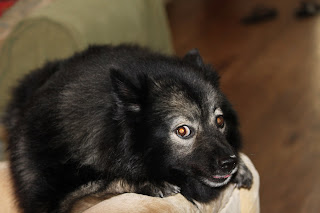 Casey never ceases to make us laugh, mostly because we usually have no clue what she's doing or thinking (and neither does she).  We wouldn't call her the sharpest tool in the shed, but she steals your heart nonetheless.  She's the young kid who doesn't understand the teacher, but looks to the other kids to see what she's supposed to do.  I'm pretty sure she doesn't understand the command "Sit" unless one of the other dogs is around to display it to her.  She does, however, know how to walk/hop on just her back two legs for a fair distance.  It's pretty cute and resembles a bear in a tutu at the circus (if that makes any sense).  Casey's claim to fame is that she doesn't particularly care to hang out with me and Jer unless there happen to be other people around that she needs to impress.  Then it's all lovey-dovey and check out how cute I am, strangers!  What a stinker! 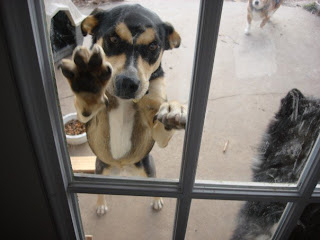 After a year of living with Riley and Casey, Jer began making comments about how he wished he had a "sporting" dog.  He envisioned taking his dog to the park, playing catch, fetching frisbees, etc, and our doggles weren't cut out for that.  I didn't figure we could handle three dogs, until a trip to the mall one day had me thinking otherwise.  The local animal shelter was hosting an adoption and a beautiful, tall, slim "sporting" dog was available.  Her tan markings were intriguing, and her name was "Juno."  She was incredibly gentle-natured and needed a good home.  Having returned from our honeymoon in Alaska just a month or two prior, I thought the puppy's name was a cute coincidence (albeit spelled differently).  I went home and told Jer all about her and begged him to go back up to the mall with me to meet her.  He did, and we walked out of the mall with our new bundle of joy.  We changed the spelling of her name to "Juneau" and couldn't wait to bring her home to meet the other dogs.  Boy, were we in for a wild ride.... 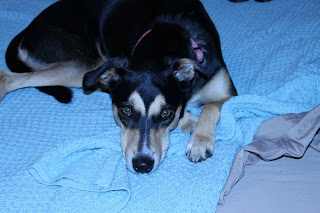 Calm, sweet Juneau did not take too well to Riley and Casey.  There was lots of growling, lots of teeth, and lots of raised hair....and this was all coming from Juneau.  Where did our sweet little puppy go??  We thought we'd have to drive her right back to the shelter, until some fresh air and free space to run settled her down.  Before long the doggles made peace, and Juneau became an official member of our family.  She definitely has the most energy of all our dogs, yet somehow didn't get the sporting gene poor Jer was hoping for.  If you throw her a tennis ball, she'll let it hit her in the face.  She only fetches things when Riley runs to it first, and then she just wants to fight him for it.  There's no hope of her picking up the item and returning it to us.  It's just not going to happen.  But, Juneau's greatest quality is her ability to snuggle.  She doesn't know that she's a large dog, and thinks she can fit into the smallest places.  If you're laying on the couch, she'll walk over, place her head on the cushion and look up at you until you make room for her.  Once you do, she'll cuddle up in a tiny ball next to you, or just practically lay on top of you.  She's the best dog to have around for sick days.  Another of her famous traits is her Scooby-Doo-esque noises.  Sometimes when we come home after a few hours, she gets so excited when we're at the front door and about to open it, that she lets out these hilarious sounds.  We can hear them outside and they always crack us up.  It's like her excitement and anticipation is bubbling over so much and she just can't control it.  It's sort of similar to this, but really you have to hear it in person to know exactly what I'm talking about! 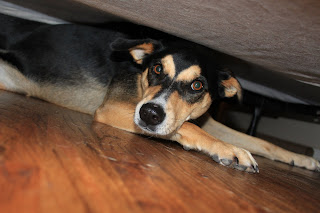 Some people may think it's silly to love one's pets this much, but I'm not ashamed!  These three doggles hold a special place in my heart, my home, my memories, and my daily life.  When I go on vacation, I miss them.  When I'm away from home for a few hours, I worry about them.  They're a wonderful addition to my life and I wouldn't trade them for the world! 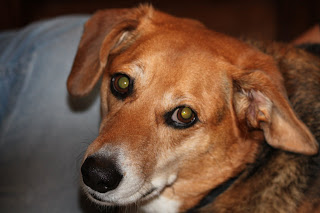 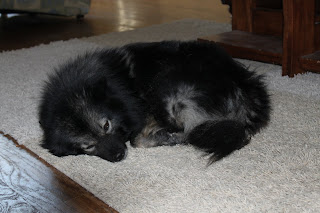 There is no shame in treating your doggles like your kiddos. I don't know what we're going to do if the kid who eventually finds it way into this world doesn't get along with the dogs....Might have to send it back!! ha ha, just kidding.....or am I?