My nephew is in the Navy, stationed in Virginia, but he has spent some time over the past couple of years in San Diego for training. When it came time to pick a location for his wedding celebration, he and his wife chose San Diego because of its awesome year-round weather and breathtaking views. My nephew doesn't get a lot of time off, so they planned their celebration around the New Years holiday. Since for most guests it was a destination wedding (her family is on the east coast and his family is in the South), the timing was helpful.

When Meezy and I heard the plan, we were definitely excited to go. Then we started thinking about the ramifications of taking a 3 year old and 1 year old on a 3-hour flight, to stay in an unusual place for 3 nights, over the New Years Eve holiday, to attend a wedding where the reception would probably stretch into the late night. That sounded pretty awful, actually, and meant one or both of us would have to miss many of the activities planned during the trip to deal with cranky kids. We were conflicted on what to do until my parents swooped in and saved the day! They graciously offered to watch the boys for us so Meezy and I could take the trip by ourselves. What a relief!

Our trip started off well because we were eligible for first class upgrades, but were in position 7 and 8 on the upgrade list. Luckily there were 8 seats available, so we just squeaked in! What a difference it makes on a long flight to have so much extra room, a private bathroom, meal service, and consistent drink service. We arrived in San Diego on New Years Eve, so we checked into our hotel (Hilton San Diego Bayfront) and then met up with my sister and her husband for a late lunch. The hotel was super close to the Gas Lamp district, so it was convenient for walking to everything. Later that day we met up with the wedding group at El Camino for drinks and late-night snacks. The plan was to celebrate the new year there, but this tired, jet-lagged mama couldn't hang! My teenage nephews planned to stay there until 10:30pm and then take an Uber back to their hotel, but the restaurant security wanted to kick them out a little after 10 due to their age. That seemed like the perfect opportunity for me and Meezy to escort them back to their hotel to make sure they made it safely, and then continue on to ours and call it a night. I have no embarrassment for falling asleep before midnight! That sort of thing just doesn't matter much anymore once you're old and have kids!  At least I got a couple of good photo ops from that night: 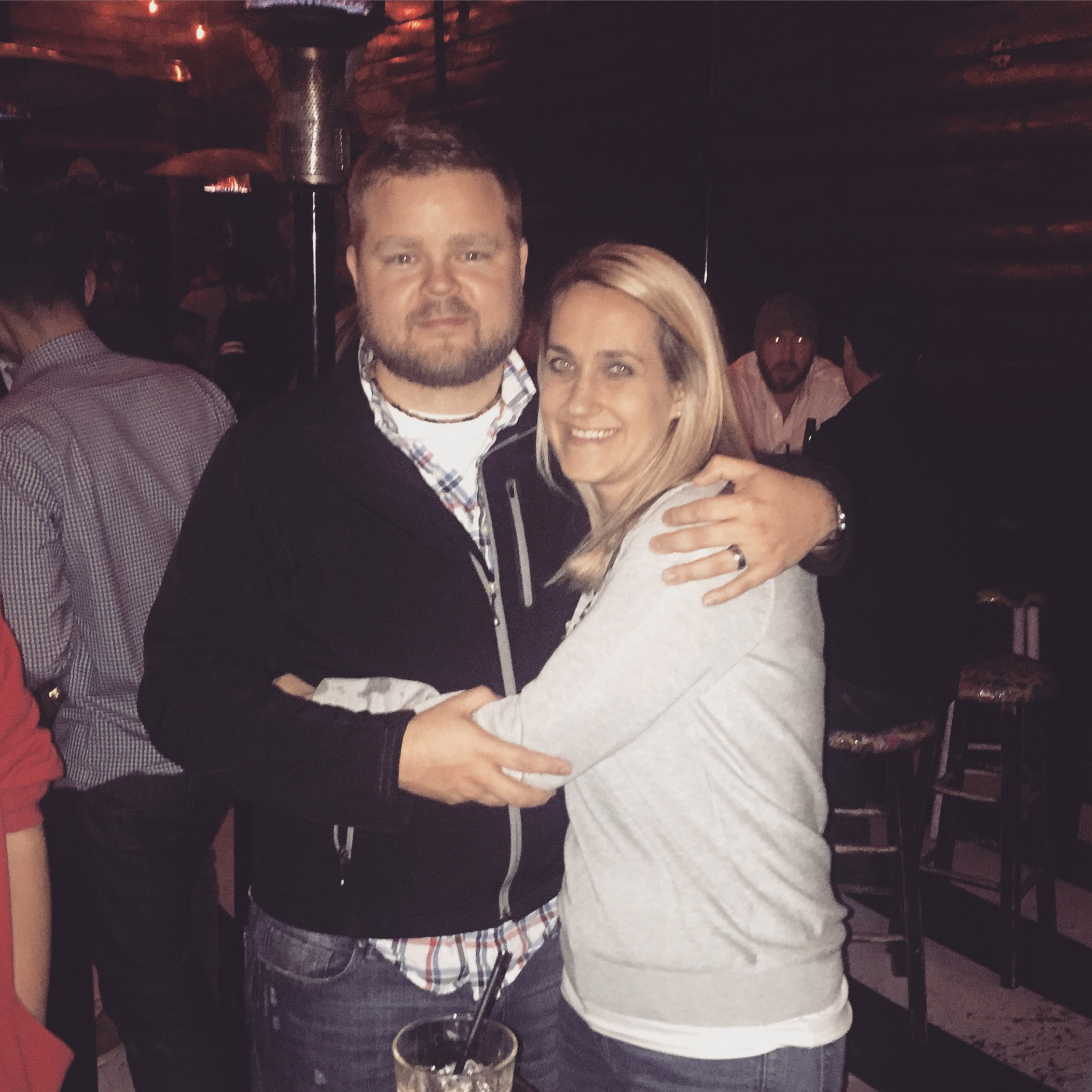 The next morning Meezy and I woke up and went for a run along the bay. The views were beautiful and the temperature was perfect for running comfortably. After we got ourselves cleaned up, we met my sister and her husband for lunch at the Pier Cafe. From there we took the ferry to Coronado Island. My brother-in-law had the fabulous idea to rent a 4-person surrey and pedal it around the island. For some reason we all agreed and departed on our journey with high expectations of fun. At a minimum, we would at least get some more fantastic views.

Even though there were two steering wheels up front, Meezy's was really a dummy wheel, so my brother-in-law was the navigator and ultimately in charge of where we went! My sister and I in the back seat were able to have a slight influence on the plans if we just stopped pedaling! Lol. That came in handy when we found ourselves needing to cross two very busy streets clearly marked on the map as ones we weren't supposed to be on! When the guys would urge us to start pedaling, but we saw cars fast approaching, we would dig in and refuse to go because we could see impending doom. Luckily we were able to find small breaks in the traffic, where we all agreed to go for it, and successfully made it! It was stressful in the moment, but pretty hilarious when looking back. We also encountered a hill at one point that was just too steep for us! Walking the surrey up made much more sense. Needless to say we returned it to the rental shop about 35 minutes into our hour-long rental. We'd had enough fun!

We left Coronado and got freshened up to meet a couple of friends for dinner. They live in Dallas near us, but just happened to be vacationing in San Diego at the same time we were. We went to Roy's San Diego Waterfront and had a great time catching up. We called it a night after that and I was pleasantly surprised to check my Apple Watch and find that I had taken nearly 18,000 steps and covered about 9 miles over the course of the day. Not too shabby while on "vacation."

The next day was wedding day - yay! The ceremony took place in Centennial Park on Coronado Island at 3:30pm. The backdrop was A.MAZE.ING. 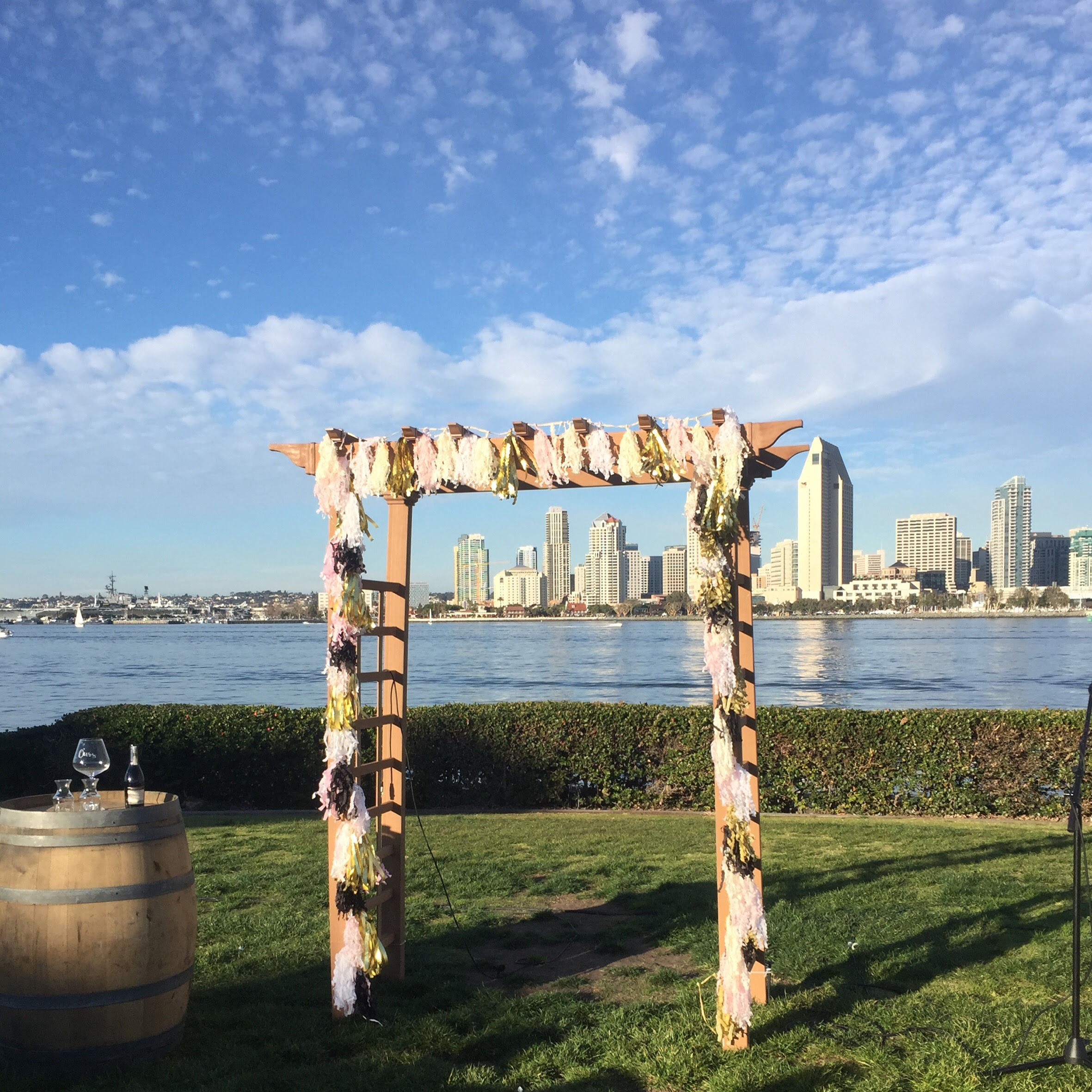 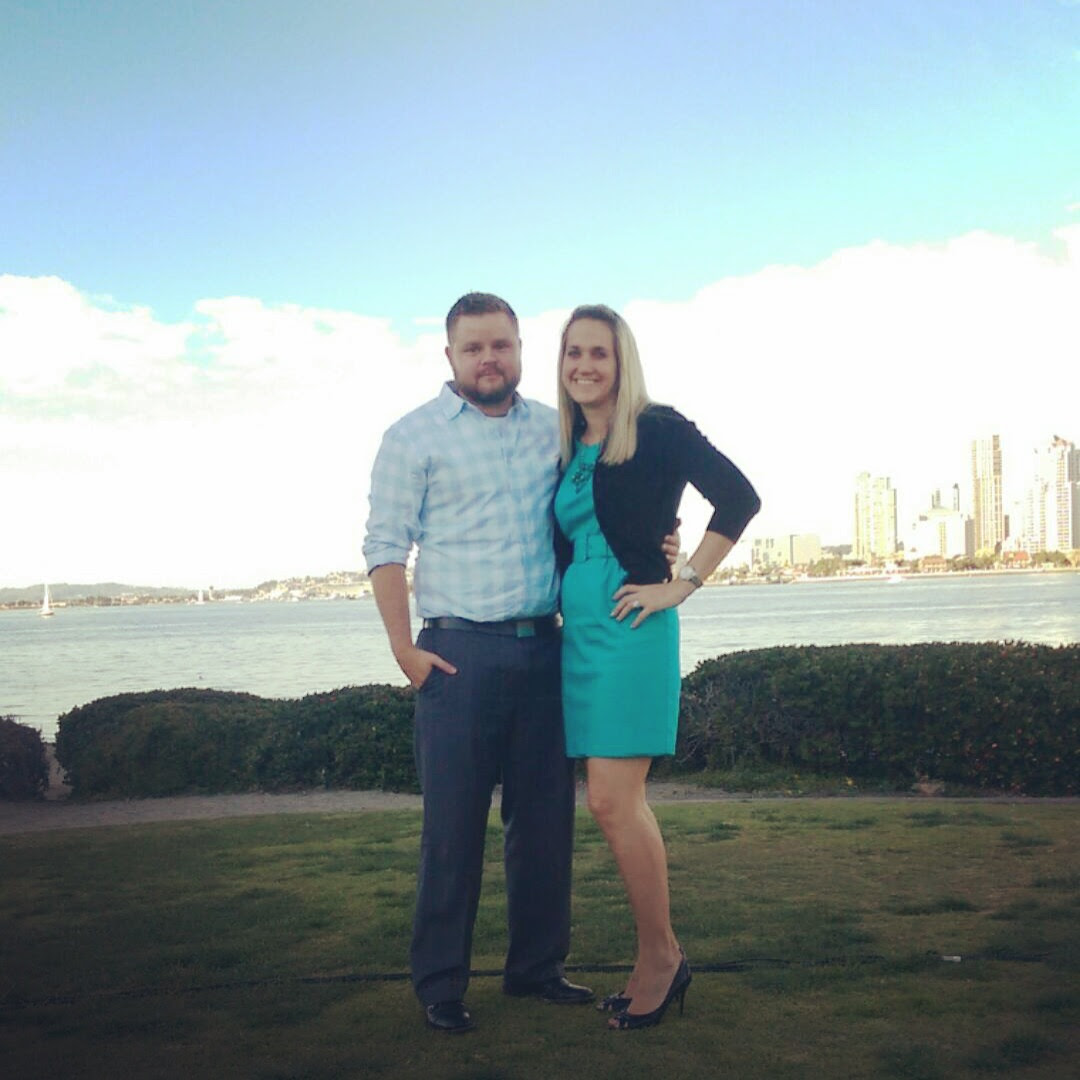 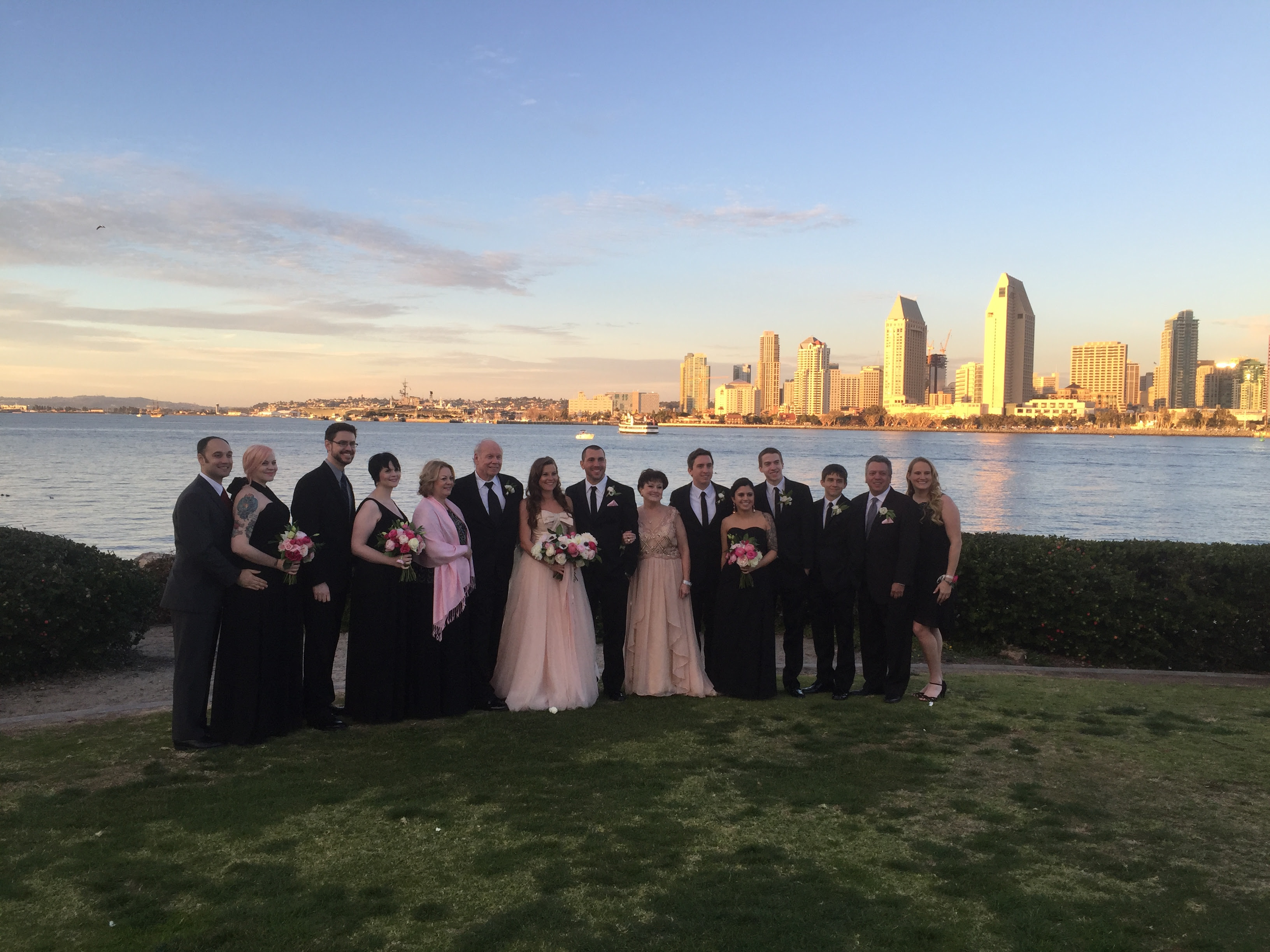 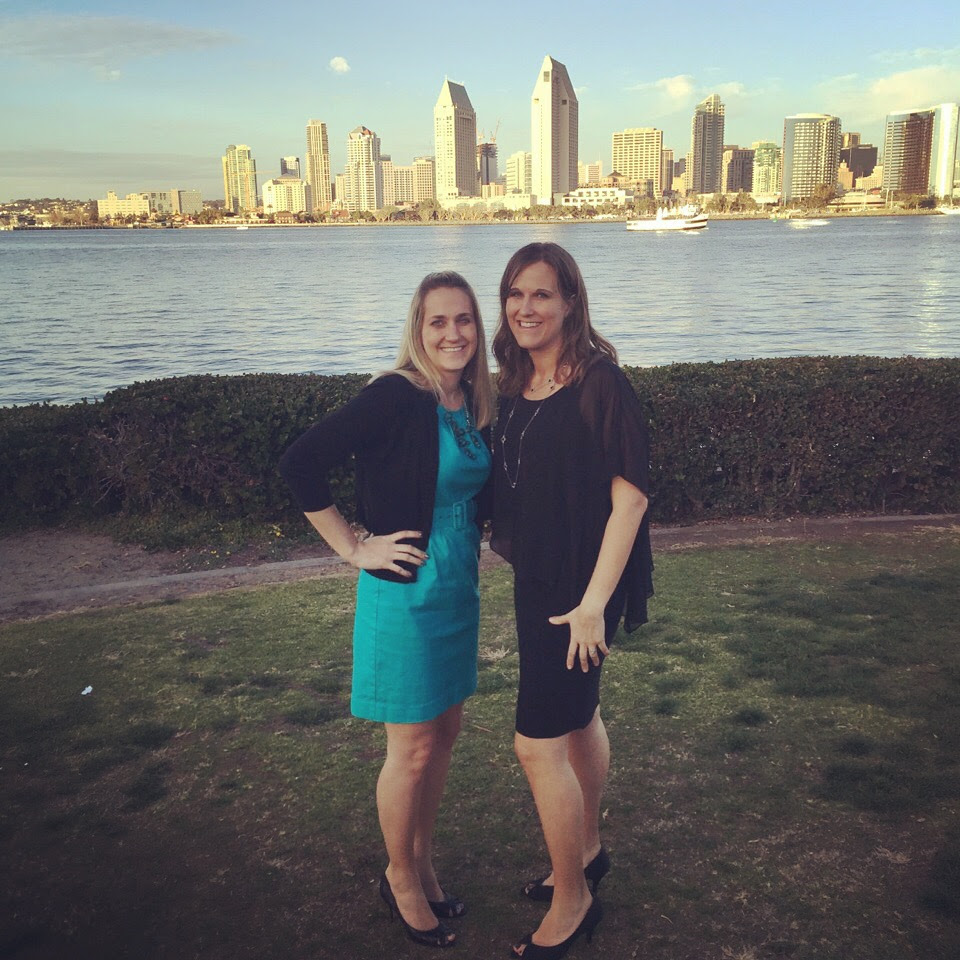 Everything about the ceremony was fantastic and they definitely stayed true to who they are as a couple. I'm so happy for them and loved being there to celebrate. The reception was held back in San Diego at the El Cortez Don Room. What a beautiful venue!  They threw a great party and I'm pretty sure everyone in attendance had an awesome time. I especially thought the table settings were super cute - little champagne bottles with your name on them and a picture to denote your meal selection: 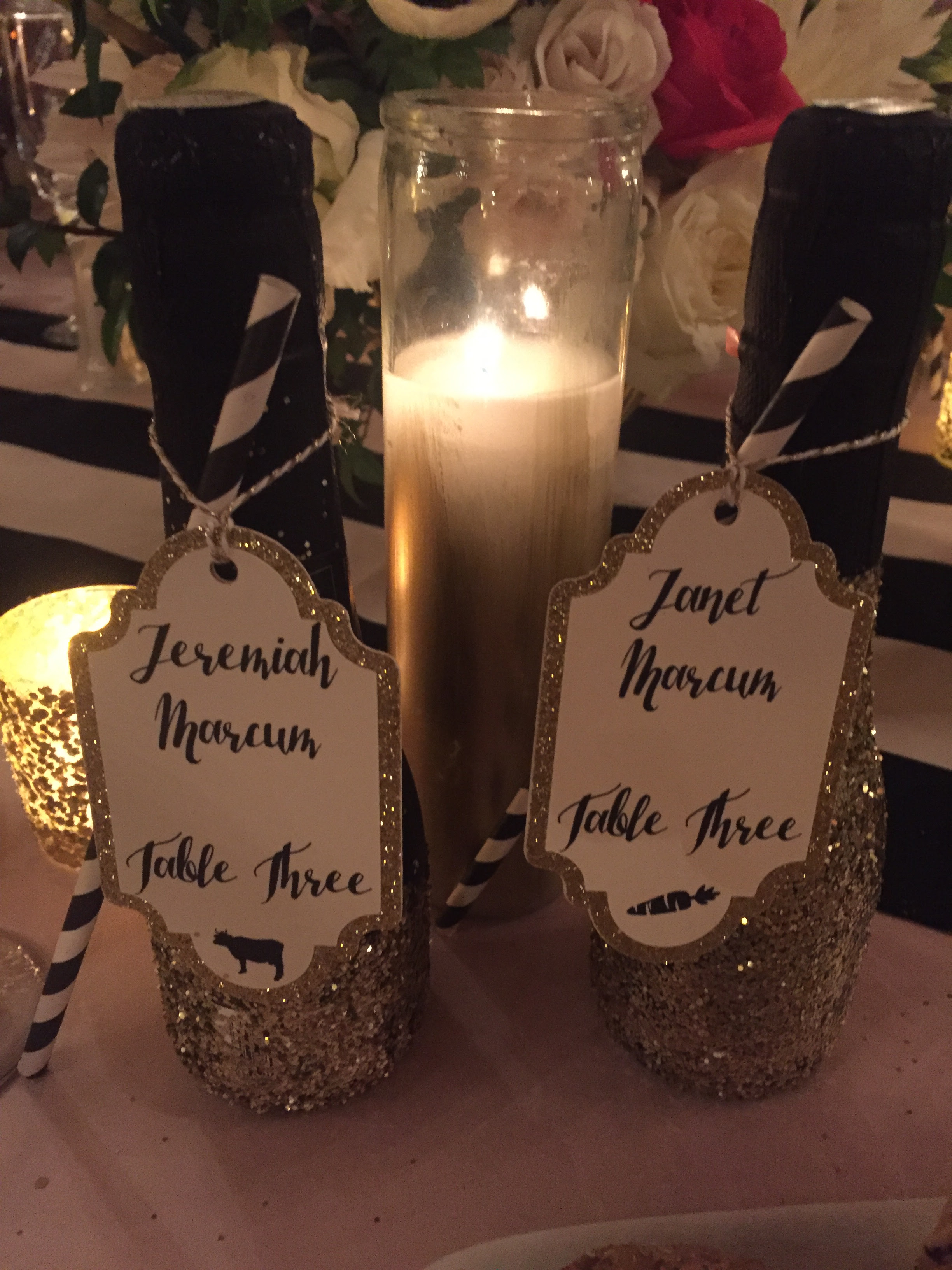 Yes, they actually had champagne in them!

My pictures don't do the experience justice, so feel free to check out this album of pictures their photographer uploaded. It's just an abridged version of all the ones taken that day, but it gives you a good overview!

Lastly - since we didn't rent a car in San Diego, we relied on car services. My friend sent me a link to try Lyft (similar to Uber) and it really worked out well for us. I think we used it probably 8 times over 4 days. It was very affordable and we always got a car and got to our destination in a reasonable amount of time. If you haven't tried it yet, I highly recommend it. Use this link to get up to $50 in free ride credit.