I used to own an Audi, so I'm on their email distribution list.  I received an invitation from them to attend a Private Drive Event for their R8 at the Joule Hotel in Downtown Dallas.  Their R8, if you don't know, is their supercar that starts at $115K and can get up to $200K depending on what options you got.  Obviously there's no way in heck we'd be able to buy one of these cars in our lifetime, but we figured it would still be fun to attend the event and get the chance to drive one!  The experience turned out to be even cooler than we expected it to be.  We arrived at the Joule and they offered us drinks and snacks and we sat through a 15 minute orientation about the car.  They told us what kinds of features it had, and then relayed how the drive event would go down.  There were 8 people driving in our session, and then each person was allowed a guest.  The driver and guest would be the only ones in the R8, and all 8 pairs of us went out on our drives at the same time.  A professional driver would be in a "lead" car at the front of the pack and another pro would be in a "chase" car in the back, just to make sure everyone was okay and that we all stayed in the same general vicinity.  They let us go on the highway for a while, and then on some winding roads.  In total, the driving time was about 40 minutes.  It was awesome!  We could've switched half-way through and I could've driven, but I was way too terrified to get behind the wheel of a car that expensive, so Meezy got double driving time.

We were surprised at how they just set us all loose behind the wheel of these cars.  We weren't on some secluded track, away from other drivers and the elements.  We were right on I-35 in Dallas, amidst traffic at times, and even as it started raining.  They had put walkie-talkies in each car so the professional drivers could stay in contact with us and let us know where we'd be heading next.  Other than that, Meezy was pretty much free to drive how he wanted!  It was really cool.  I'm sure it looked a little odd to other drivers and people on the street to see 8 Audi R8s driving next to each other!  Here's some pics of the experience, and a couple videos for a little taste of what it was like to be a passenger. 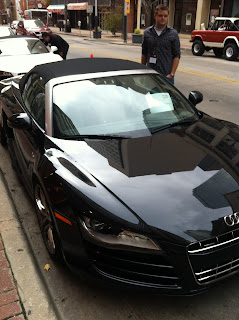 It had our name on the dash 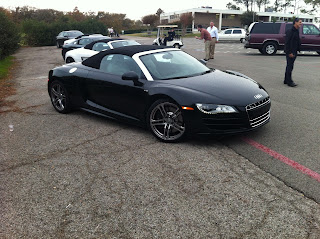 The one Meezy got to drive 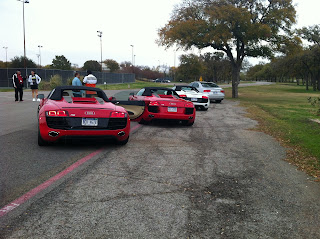 A few of the other ones 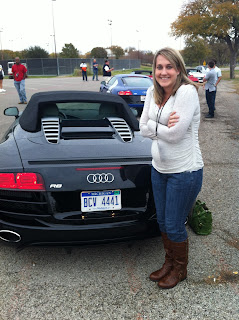 Baby Dutch made an appearance 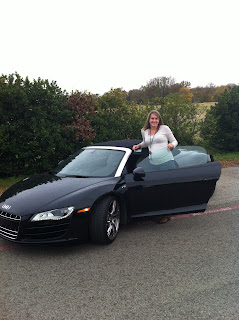 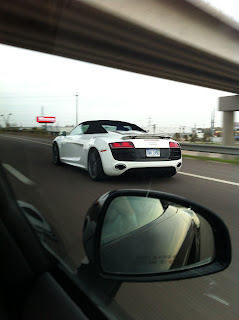 On the highway alongside another R8 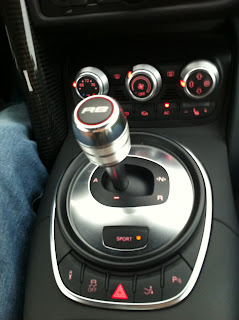 It was an R-tronic drive 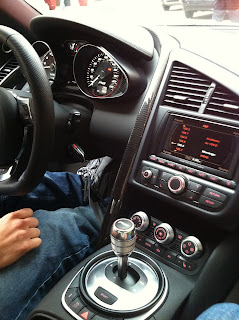 All the fancy gadgets 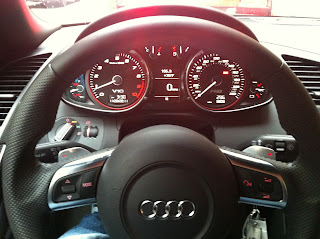 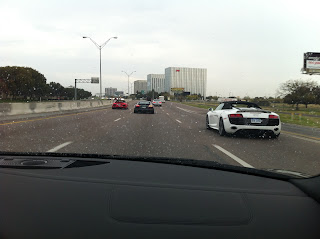 Not your normal view on I-35
This was the group of us leaving the Hotel.  The voice you hear is one of the professional drivers over the walkie-talkie:
And us getting on the highway.  Man, I love the sound of that engine!
Posted by vanweezy at 6:09 PM