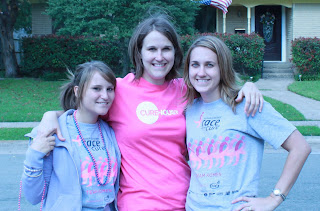 The Komen 3 Day Race took place in Dallas this past weekend.  I didn't participate as a racer, but I helped in other ways!  The race path passed in front of my sister Jo's house on Saturday, so we set up shop outside to cheer on the racers.  Jo had an awesome spread available to the racers - bowls of candy, beads, kleenexes, anti-bacterial soap, and lawn chairs for breaks.  We cheered, took pictures, shouted words of encouragement, and thanked the walkers for being a part of something great.  Livy even participated too - she zonked out after an hour of cheering, so she napped on Jo's 3 Day T-shirt blanket and provided smiles for the racers. 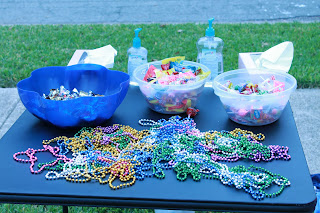 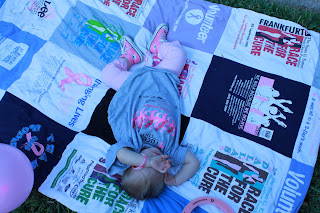 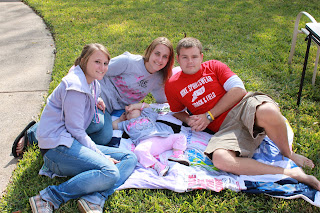 On Sunday, the racers made their way through Downtown on the path to Fair Park where the race finished.  Kim, Jo, my mom, and I all volunteered at Pit Stop 4 with Komen employees.  We handed out buttons, cheered the racers, replenished water bottles, answered questions, distributed snacks, and helped tear down the Pit Stop after it was over.  At that point, the racers had just 2.9 miles left on their 60 mile journey.  Many were tired, but their spirits were strong.  It's so fun to be a part of something like that, because the vibe is just so positive.  Everyone is hopeful for a cure, and knows they're playing a part in making it happen.  The most interesting part to me is just how grateful all of the participants were to us.  I hope they realize just how thankful we are for what they were doing.  Maybe next year I can be a racer instead of a volunteer. 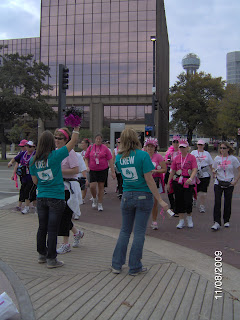