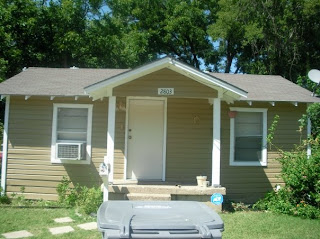 This past weekend, I participated in a volunteer effort coordinated by Habitat for Humanity with my mother and my exchange student, Kim. We arrived at the location (near Hwy 175 & Rochester Park in South Dallas) at 8am. The assignment was to paint the exterior of a house from top to bottom. It wasn't a "Habitat" house, but instead was an existing house in the neighborhood where they were building multiple Habitat houses. Their idea to spruce up a neighboring house was to hopefully make it less obvious which houses were Habitat ones, so that the entire neighborhood started to improve. It was grueling work in the hot, hot sun. (I've got some sore muscles and a sunburn to prove it!) We worked until about 3:30pm, when the house was finally complete. We never got to meet the homeowner, but we did get compliments from neighbors telling us what a great job we had done.

It's funny how a fresh coat of paint can make such a difference. Using supplies provided by Habitat, 15 of us spent about 8 hours of our time and we completely rejuvenated a previously dilapidated-looking house. That's not too big of a burden on any one person. But, just imagine how impossible it would've been for the homeowner to attempt to pay for and coordinate getting new paint on his/her house. I'm sure it would've taken much longer and been very costly. It was cool to see what we were collectively able to do in a relatively short amount of time. I have no doubt the homeowner was pleased with our efforts. I'm glad Kim was able to be a part of such a wonderful experience! 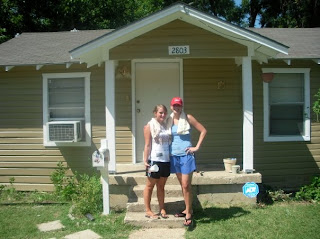 That is awesome. Such a rewarding experience.

A fresh coat of paint on a house gives the family that dwells within the same feeling of restored pride and esteem as a new mascara to a woman who had to flee without hers...

You did a good thing.